DIECAST CURIO
​First Impressions:
2006, in anticipation of a new aircraft, Aeromexico boldly made major adjustments to its livery. For decades, Aeromexico's tarmac brand was known and recognized by its polished metal fuselage which stayed largely consistent throughout the 70's, 80's and 90's. But in 2006 Aeromexico made plans with ILFC (International Leasing Finance Corporation now AerCap) to bring 3 new Boeing 787s into the fleet. Because 787s are largely made from composite, they would not be able to sport the usual bare metal look, and in the name of uniformity, Aeromexico moved to rebrand and paint the fleet in a style (Eurowhite) all too commonly found across today's airways.

​While many traditionalists displayed disappointment, and very little patience for the new livery, it has since been the look for all AM aircraft and it was put on display when this very aircraft was delivered to Aeromexico in August 2006 just a few days after her first flight. EI-DRA was the first 737-800 for Aeromexico and since her delivery in 2006 she's been serving primarily on routes between the U.S. and Mexico connecting New York City, Las Vegas, and Los Angeles to central AM hubs.

This particular model is the 38th Boeing 737-800 model that Gemini Jets have produced out of nearly 100 including their Max-8s and it hit markets in 2010. The mould itself was first made available to collectors in 2000 when Gemini released a Continental Airlines -800, registration N12216. Since then the mould itself has been used roughly 60 times until about 2014 when Gemini developed a new slot-in mould which they swapped for the cradle mould seen here. This mould was last used from what I can tell in 2014 on a West Jet -800 with winglets.
This aircraft has interestingly been selected on multiple occasions to wear special banners and paint scheme's. I think all of these could reasonably be done in 1/400. If I had my choice we'd get the "Beer plane!"
Construction:
As I mentioned, this particular mould has seen substantial use but is likely at this point retired because since 2014 Gemini has implemented a new mould which among other things features insert wings and allows for the installation of aerials and wifi domes. This particular model has only ever been updated with wings featuring the blended winglets and the occasional lumpy looking wifi dome. It features diecast gear stands and plastic non-turning gear wheels.

Obviously in 2010 this was considered a very strong model and I purchased it first hand the month after it was released. In those days the only QC issues you'd typically find on a GJ aircraft were the occasional loose gear wheels or some minor mis-printing and rarely, but sometime a cooked blended winglet or crooked gear leg. Most fortunately, There are no such issues here. The model was pristine out of the box and now almost 10 years later, it looks as good as it did the day I bought it. Usually this is part where I'd go on, tip to tail about each separate component of the plane but as this is an older model and I can surmise it was built well, I'll spare you from the mundane. 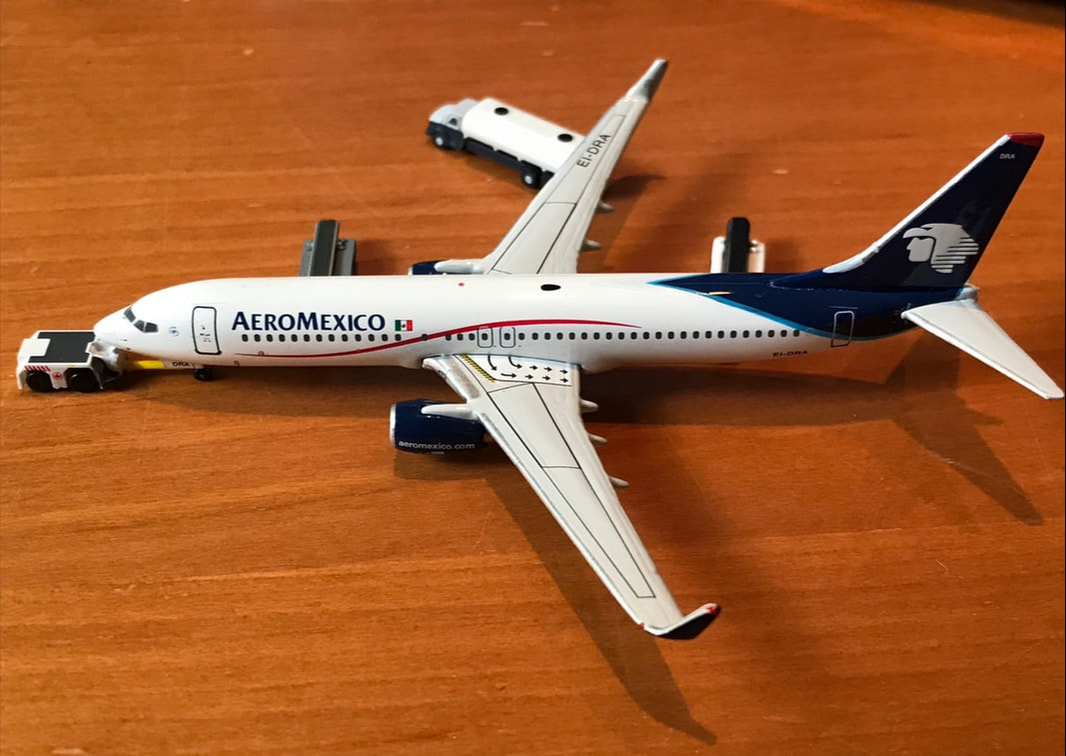 ​Accuracy:
Taking a look at the over all accuracy of the mould and how it was executed on this particular aircraft, we may first inspect the all important nose and front end of the aircraft. The Boeing 737-800 has arguably the most recognizable nose of all midrange passenger aircraft due to its incredible sales record and ubiquitous presence in pax fleets (and now freight only fleets) around the globe. 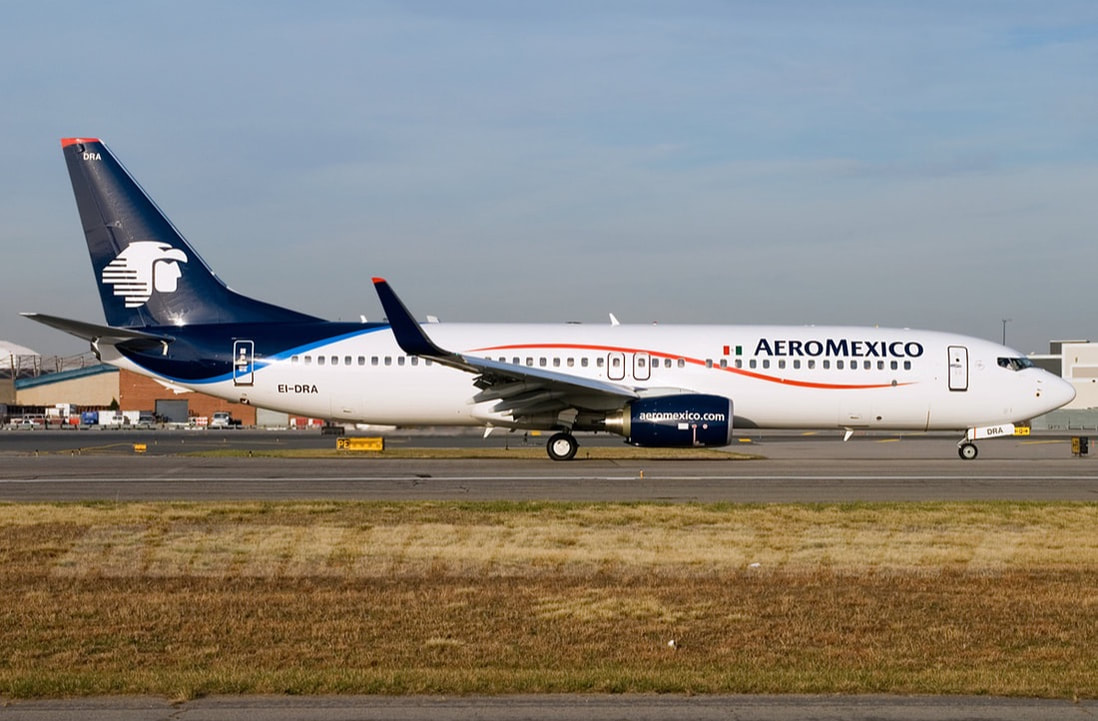 Photograph by Michael McLaughlin, 2006, New York (Airliners.net)
Considering it was produced in 2010 there are many forgivable inaccuracies around the nose of the aircraft. the most glaring of which is the issue with the overall size and angle of the gear doors and the unattractive concave area around the slot where the main landing gear door is placed. Up close the area's inward angle around this area takes away from the proper appearance of the nose of the plane.
Besides the cockpit windows being a bit too large, the rest of the front of the aircraft looks really good. Gemini have even done what I would consider a really good job on that red ribbon that runs along the fuselage. It begins and ends almost exactly where it should.

The midsection of the aircraft is really good for a 2010 model. The most successful detail is the CFM56 engines. Every time I look at how much detail Gemini was capable of 8 years ago, it frustrates me when models arrive without any detail on the engine cowlings at all. Some of these components are not printed in the right size, but the engines themselves are really good. Perhaps a little too flat on the bottom but over all, they are a triumph and good enough for today's models.
Other parts of the aircraft are very good. The wings look great, are well shaped and perfectly aligned to fuselage. Sometimes these cradle 737s come with a slight wing gap or improper alignment if they aren't glued together with care. No issue with installation of the wing set or the main gear set here, but the main gear struts are too long. The fallacy of the mould however is that the legs must be this long to prevent the model from being a "tail-sitter." The engine pylons are too thick but again, passable. One other critique that is forgivable based on the age is the thickness of the blended winglets. They should be almost paper thin at this scale but that's obviously not attainable unless you use plastic. (No thank-you).
Everything about the tail section is at least pretty good. The rear cabin doors are underwhelming in the detail department but that's more of a paint and printing issue. None the less, this is paint and printing of real airplane components like door handles and windows so it to me still qualifies as an accuracy component.  While those details are on there, they are no where near as vivid as they are on the 1/1. 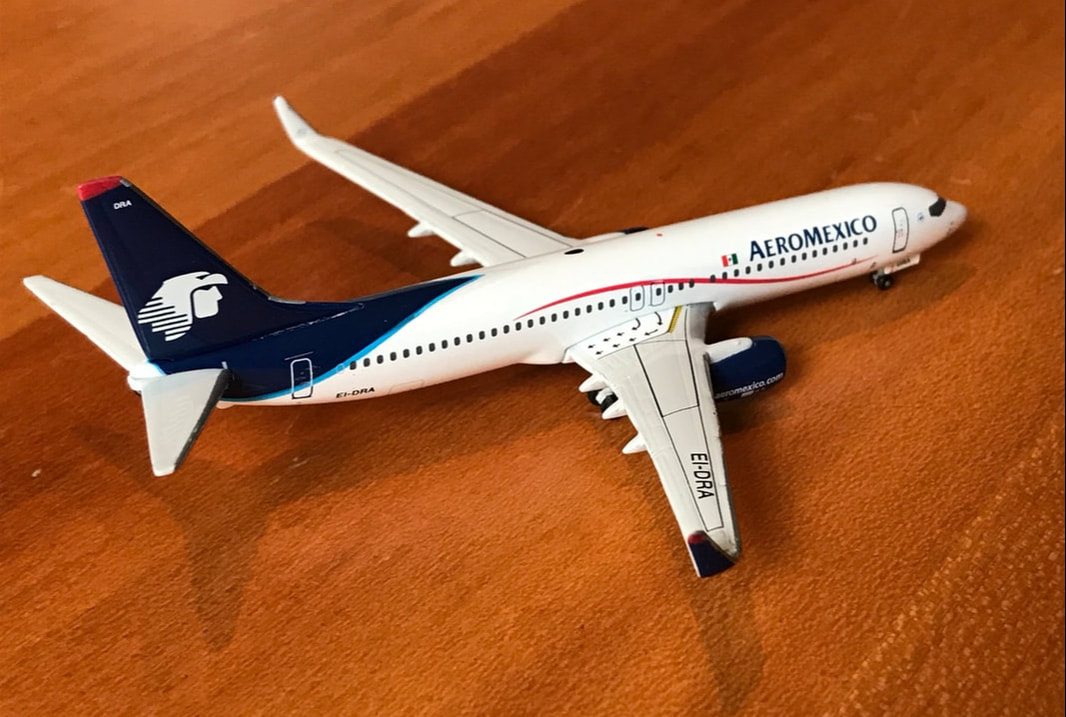 Even though companies like NG model are developing 737-800s on a new much more modern mould, I still find this one relevant. I have roughly 17 models on this mould from this manufacturer and for the most part, they display some of Gemini Jet's best work. This mould may not have today's detail, but always came in one piece and usually paint and printing errors were difficult to find upon a first glance. 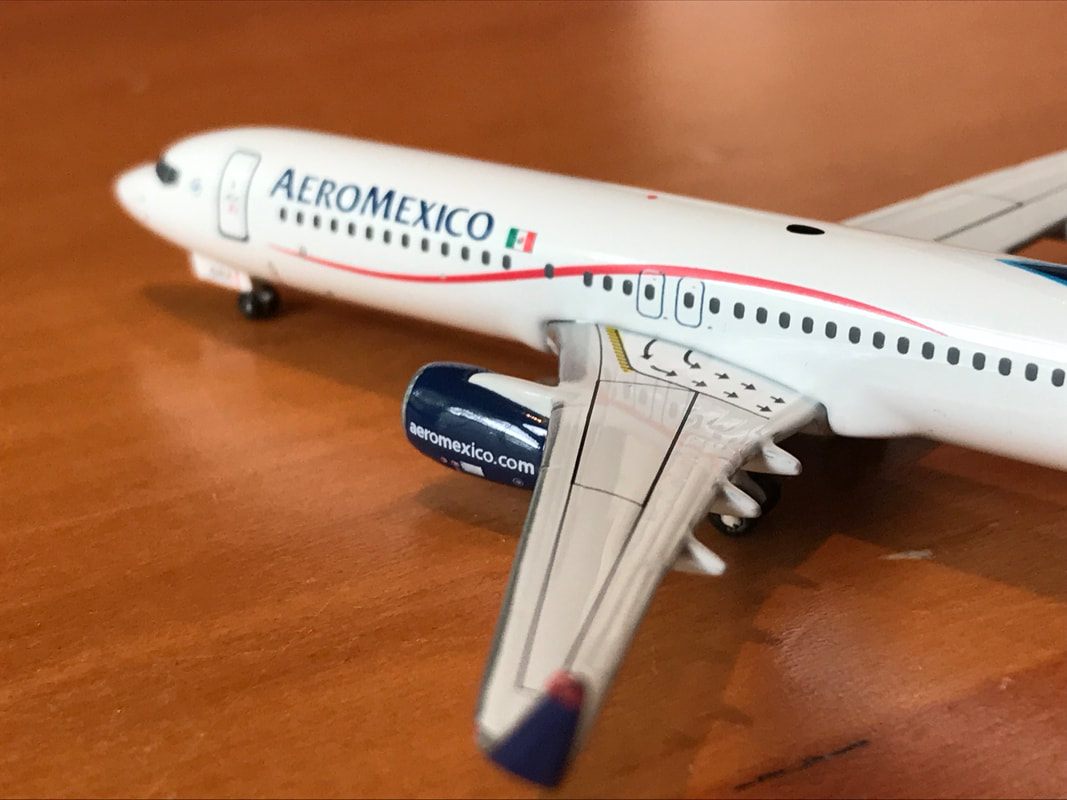 Paint and Printing:
As I just alluded to, the mould may be obsolete by today's standards, but I just finished unboxing a few new models from Aeroclassics (April 2019) and more than one has iffy paint work and another has really poor printing on the engines. Nine years before these arrived from AC, GJ was doing superior work on models like this.

For starters, the white base coat is milky white and has been carefully applied. There are no signs of haphazard brush marks or chips or smears comparable to an Embraer 175 I recently received from Gemini which has all of these undesirable features. Even after years in storage, the glossy white paint looks brand new.
The over wing painting also gets an honorable mention. The wing surface is silky smooth and also features very nice over wing features including emergency exit guides. The winglets although too thick, but are also nicely painted and a subtle Aztec logo can be seen correctly and faintly printed on the inside edge. (Not pictured).

The dark blue on the vertical stabilizer is also beautifully painted and perhaps the coat of paint is applied too thickly over all but it leave a nice rich looking finish on this particular model. A minor error is the thickness of the red stipe at the top of the tail, it is too large overall.
Moving on from the painting, the quality of the printing is very good. There are several highlights. The red ribbon that runs along the fuselage is particularly well executed as is the "Aeromexico" titles, the Mexican flag, the "Boeing" titles, and the Aztec warrior on the tail. Each of these details are done as well as anyone could ask.

I would argue that the overall painting and printing quality are the strongest attributes of the Gemini model. Collectors in 2019 have much nicer moulds coming in from manufactures than we ever had in 2010, but these are frequently soured by a lack of paint application and print quality. There's a lot of past that can be learned.
Conclusion:
Sometimes I'm not prepared for how much I enjoy taking a model out of it's packaging after not seeing it for a while. As I've moved in the past year and have more space now to enjoy my collection, getting reacquainted with some of my favorites has been well worth the wait. The model represents everything that was great about collecting model planes back in 2010 and represents where we could be in 2019.

This model also represents an over all important modernization that began for Aeromexico in 2006. Besides the obvious improving global economy, a strong new brand has helped maintain financial growth for the company and EI-DRA has played a part in the successs of the airline.

Left side is 2019 and compares to 2018 on the right, numbers are in the millions.
I have about 7 models that sport an Aeromexico scheme, this one is easily my favorite. It's the only one I've ever seen the 1/1 version of with my own eyes (LAX). I don't collect Aeromexico religiously but when there's one I like, I go and get it. I like the old raw metal look, but this is one of the rear instances where I like the new modern look even more. Finally, the consistent quality I find in my models from this era begs the question, when will things improve when it comes to quality for GJ? 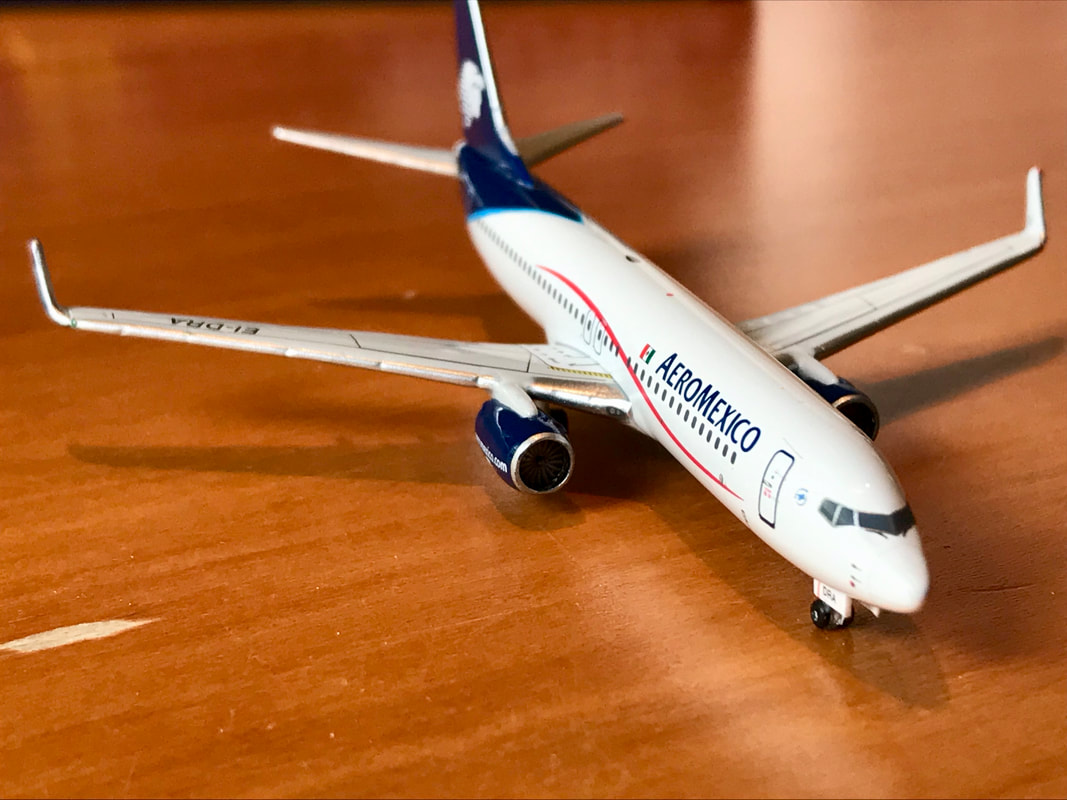