DIECAST CURIO
First Impressions:
Air France began in 1933 when several existing companies merged. 75 years later, Air France paid homage to its roots by painting an A320 (F-GFKJ) In colors dating back to it's early days when many of its routes were flown by DC-3s. I picked up this model years ago and I've finally got around to learning more of the history. I went through a phase were I was strictly fleet building legacy carriers. I figured adding this model would be a nice touch. It hasn't been until recently that I've done due diligence in learning about its heritage. This is an older Phoenix model produced in 2009. DiMA claims that there have been 600 copies made. This Airbus model uses the old cradle fixture system. Often when old liveries are applied to modern planes there sometimes seems to be wasted space and that can lead to an uncomfortable feel to its appearance. Amazingly this model is now almost a decade old and looks great.
Construction:
The real version of this aircraft, line number 63, was first commissioned by Air France back in 1989. Since that time it has learned the better parts of Europe and the surrounding areas flying to dozens of cities and countries . After wearing the title of the oldest aircraft in the fleet for a time, it was finally retired in 2013. Before decommissioning it was given the privilege of wearing this special paint from 2008 until it was flown to Phoenix AZ for scrapping. After some light research, I'd say its greatest day was at the 100th annual Paris airshow as a static display.
​
In the palm of my hand, this model feels neat and clean. It's all metal construction features quality parts and joints on this older cradle style format. In 2018 there are certain things that make it feel dated, like the absence of rolling wheels or attached antenna and the like. While simultaneously it feels like a reckoning back to better times in the scale when quality pieces were the norm from the Phoenix group. Anyone who has a model from this time period knows what I'm talking about but anyone who doesn't must understand while todays production models look flashy and complex, the models of ten years ago still have some style that has not been replicated since. 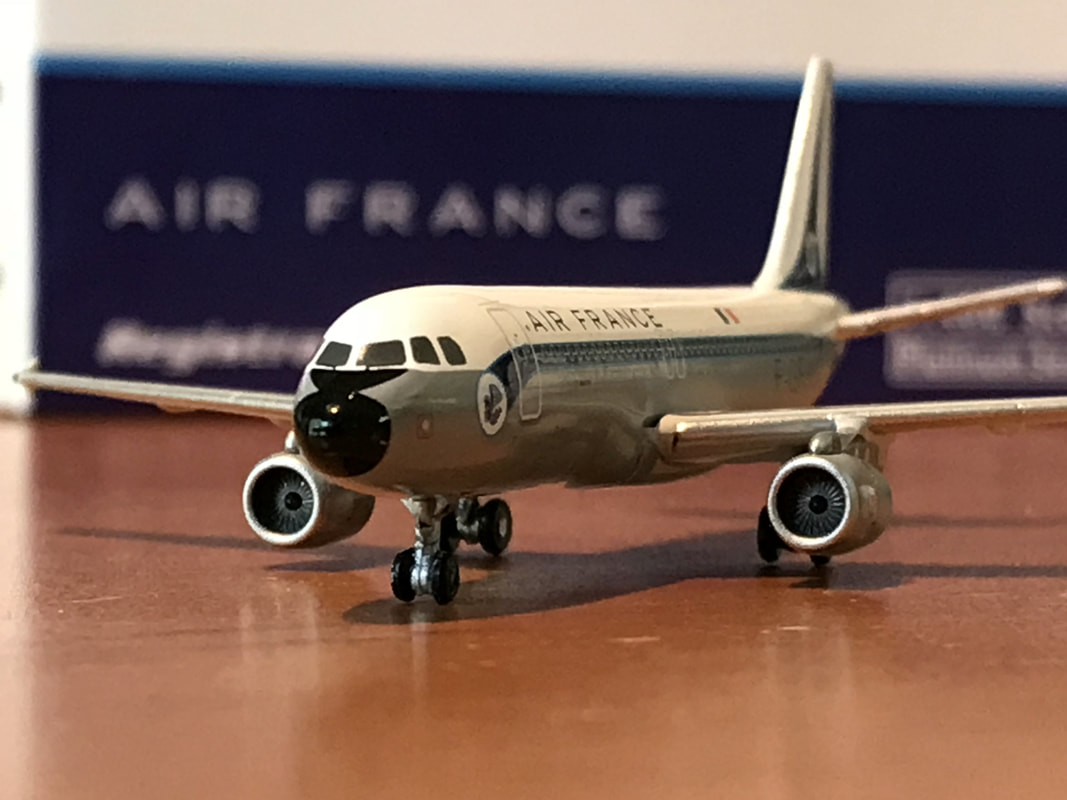 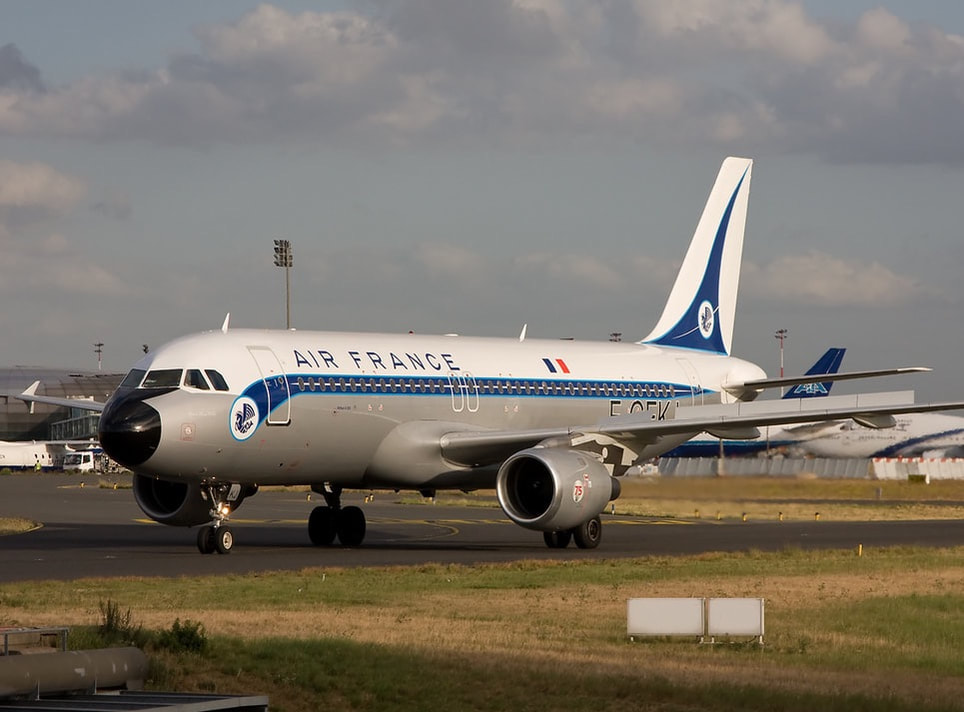 Photograph Credit: Ole Simon, Airliners.net.
​Accuracy:
Bearing in mind the age of the mould versus the age of the article, the accuracy of this model is good. This older mould used by I believe both Gemini and Phoenix at one point really keeps things in line. There aren't too many stand out inaccuracies, but a few things to note. The landing gear is surely too large, especially on the front strut. The main wing joint which is skewed because of the mold is not the proper shape or size.

By today's standards there should be some form or antenna or fuselage outfit giving the aircraft more texture, but this as not something that was done by anyone on medium range models in 2009.

One final critique is of the engine pylon. It should extend further down the turbine cowling to the point where it almost runs flush. However on this model, the pylon stops far short of that and falls off abruptly. There is also an unsightly gap between the pylon and the cowling itself. Otherwise, in its time, this is a fine model and shows no other flaws from either its design or the way it was presumably hand assembled. 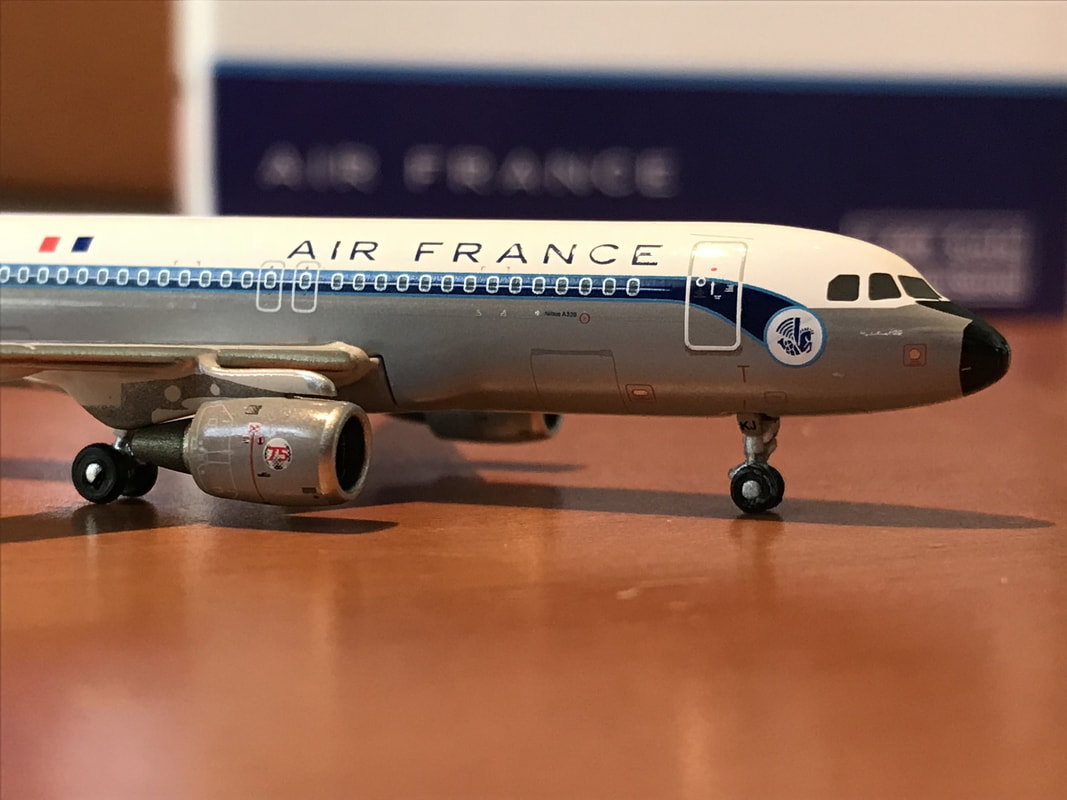 Paint and Printing:
Many of the models in my collection from the era of 2007-2010 show that excellence in painting and printing on such a small scare could be done back then. This proof tells me that todays models should be even better, but often they are not.

The paint on the model shows absolutely no flaws. No bubbles, chips, or signs of laziness. (The model is not off-white, just bad photography). Both the white coat on the body and the gray flake on the lower half of the aircraft look great and the wings are neatly done as well. Some obscurity exists on the outside of the pylon but no matter.

The triumph of this model and its best detail is the thin white pinstripe that runs along the royal blue cheat-line. Having such fine details show up in this scale are a treat to the collector that takes the time to enjoy a model long after it has been purchased.
​
Another success is the neatness of the seahorses on both the nose and the tail. I'm sure keeping bleeding from one detail to the next on this scale is a challenge as well. However Phoenix have it mastered.

There are some things that are a little off. The blue used on the tail is a little too dark along with the color of the cheat line. The cockpit window placement is also a little suspect with the windows in most cases being too far apart.

One final treat is how well the tail was designed and painted. There is another very subtle white line that arches up and is, like most of the rest of the fine details, done well. 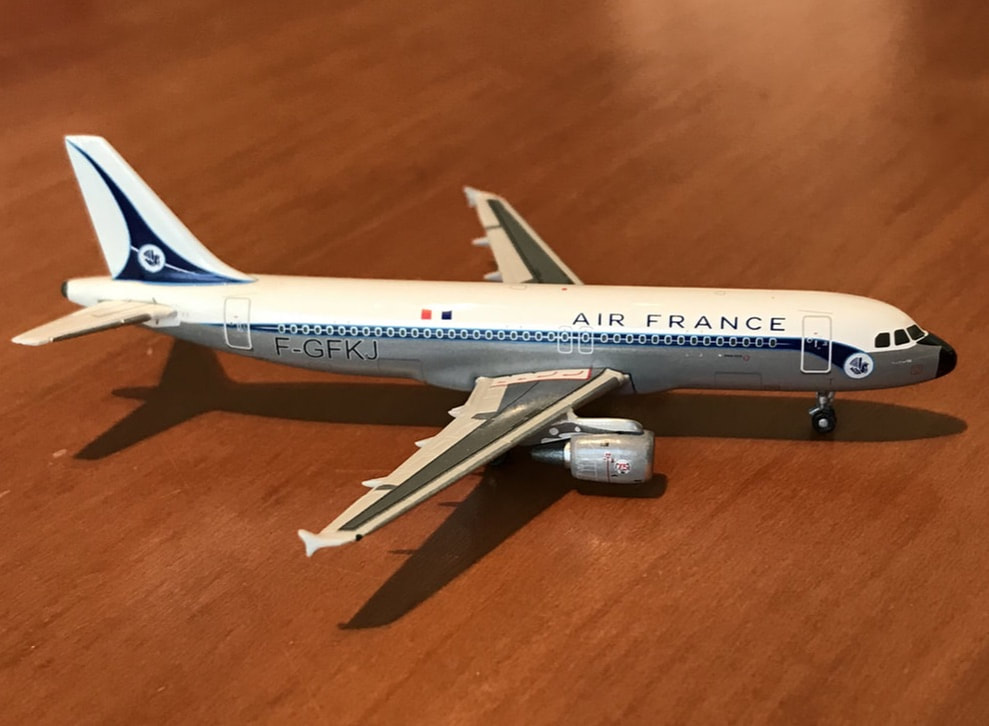 Conclusion:
It is with some ignorance that I own this model. In fact, I honestly didn't realize that it has been all but turned to scrap. As Air France came into its own in the 1940s with DC-3s that wore these colors, this model appropriately carries on the heritage as being one of the first A320 customers and showcases some of the airline's rich history. Ironically, this plane although posing as a modern version of an old livery is now in-fact a classic itself. If you get the chance and the price is right, help yourself to this great model. 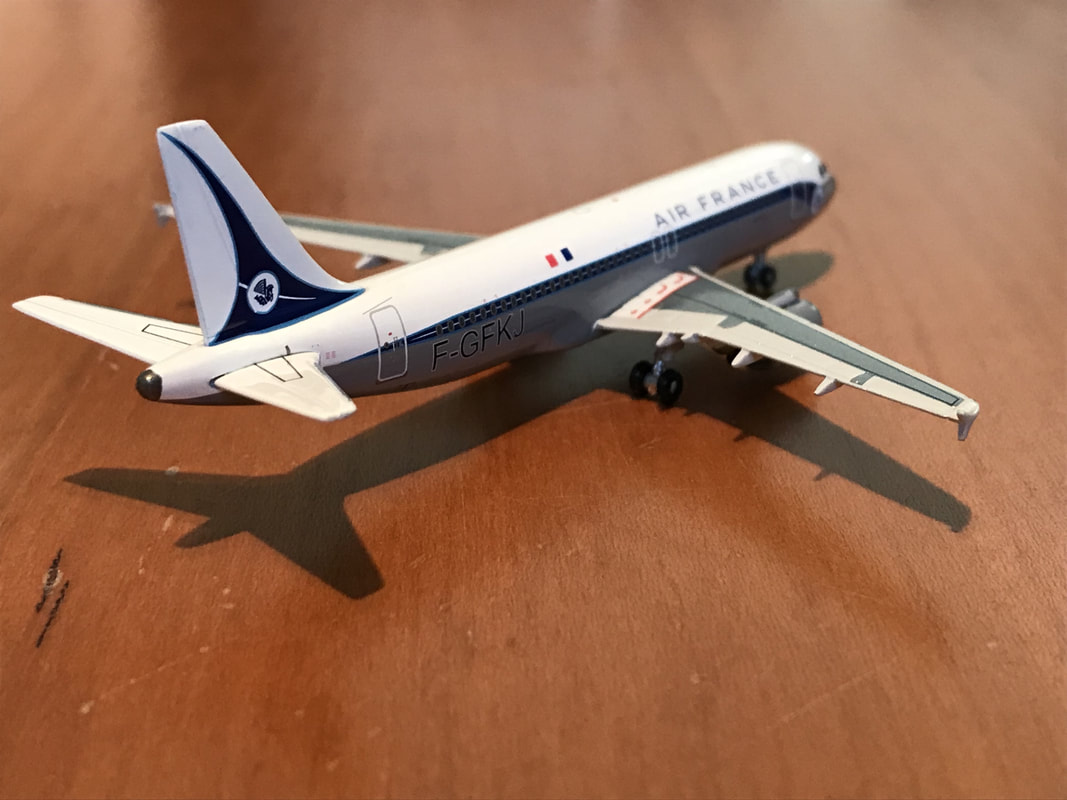