DIECAST CURIO
First Impressions:
In the year 2000, I was most fortunate to travel to New Zealand. It's the only time I've ever been and have always thought of going back. We spent over a week on the North Island, taking time in Aukland, Rotorua, and Wellington. I remember having a full day to spend with the Maori people around Rotorua and learning about the Maori and their Eastern Polynesian culture. This was a time when I paid no real attention and had no interest in commercial aviation and it wasn't until much later that I realized the connection between Air New Zealand and the koru logo it uses.

I have a respectable ANZ collection. A number of which are begging for review. ANZ's short portfolio of schemes are some of my favorite and this DC-10 from Aeroclassics pays the group a compliment referencing its rich history of providing Trans-Tasman (New Zealand to Australia) flights for the people in this region for nearly 78 years. The DC-10s ANZ received in the 70's introduced the koru logo.

To begin with, I must explain I typically collect modern aircraft from this side of the year 2001. I have been very attracted to aircraft from a much earlier era lately however so I by no means claim to be an expert on the type, but I am an regular consumer of 1/400 aircraft and no matter the era, there are certain things I always look for when I review the quality of a model. At first glance, this is a pristine piece. 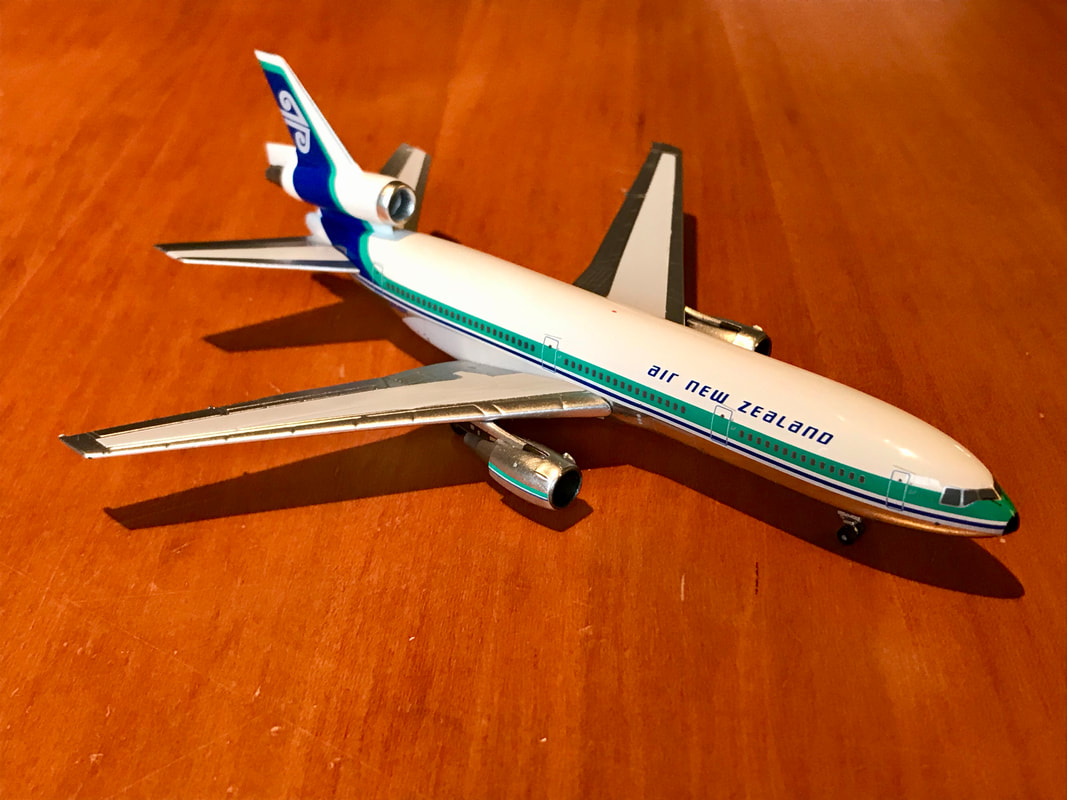 First Seen:
ZK-NZR rolled off the line in August of 1975. The same year of the Watergate Scandal in the U.S., the same year Queen released "Bohemian Rhapsody," it was the end of the Vietnam War and the death of F1 champion Graham Hill. (By the way, 1975 is a fascinating read). She was promptly delivered to ANZ and served on several long haul routes until 1982.
Last Seen:
ZK-NZR would eventually spend time with four other airlines. She became F-GDJK with  LAM in 1982 (Also done by Aeroclassics in Dec 2018) Air Martinique, AOM, and then Air Lib. Although after Air Lib acquired the airframe through its merger with AOM, the aircraft was never flown in Air Lib colors and was sent to become scrap once Air Lib proceeded into liquidation. 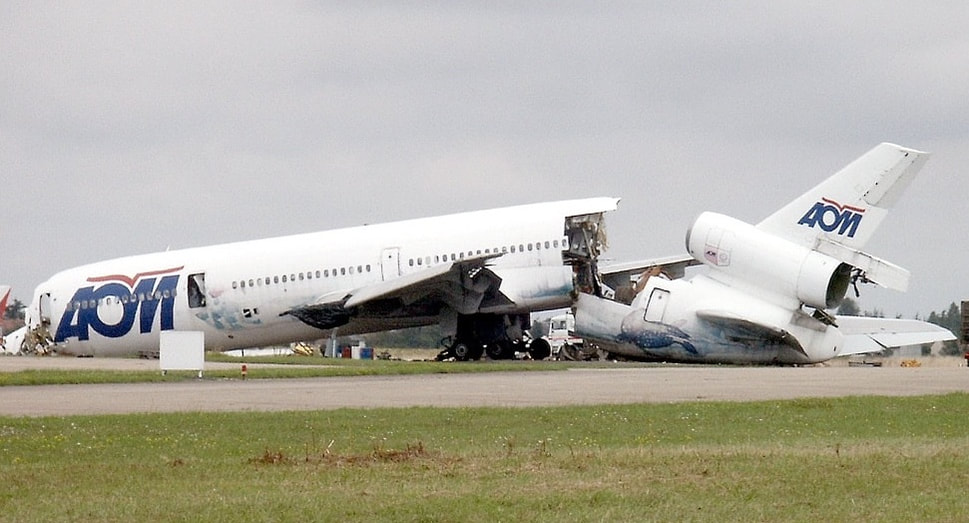 Photograph by Micheal Shmidit: Airliners.net, 2004.
Construction:
A stagering 127, maybe more DC-10-30s have been created by Aeroclassics according to a few various database searches. That's easily double that of the next closest model manufacture which in this case is Gemini Jets. Speaking simply from the standpoint of experience, this makes Aeroclassics the authority on DC-10s. All this experience has led the AC team to develop a more practical way of shipping this famous trip-jet aircraft. If you purchase one today, you'll notice that your airship will arrive without a nose gear firmly attached. Instead you can usually find the spare gear and gear doors neatly packaged and tapped to the inside of the cradle.

I'm told this is done because in the past, the front gears have had a tendency to pop off during shipment. I must say, after overcoming the initial amusement of this feature I was happy to complete the model's assembly on my own. It actually forced me into the manufactures shoes a bit in that I had to look at several DC-10-30 photos to make sure the pieces were being correctly put together. All this was done with just a few drops of super glue and the aircraft still sits nicely in its cradle.
This model was delayed from December because of admitted quality control checks. I am happy to say that the efforts to do this have paid off well in the construction category. Out of the box and into the had, a beautifully solid model. The thick piece of die cast and all of its connected components are very neatly and sturdily assembled. Gears, stabilizers, engines, and their subcomponents are all correctly fastened without any noticeable crookedness. Well done AC. 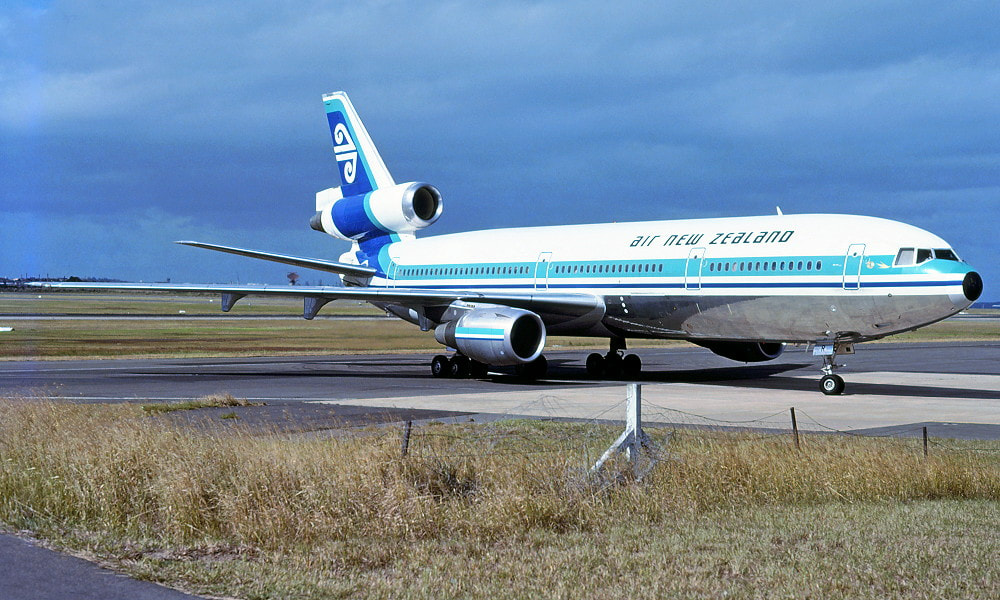 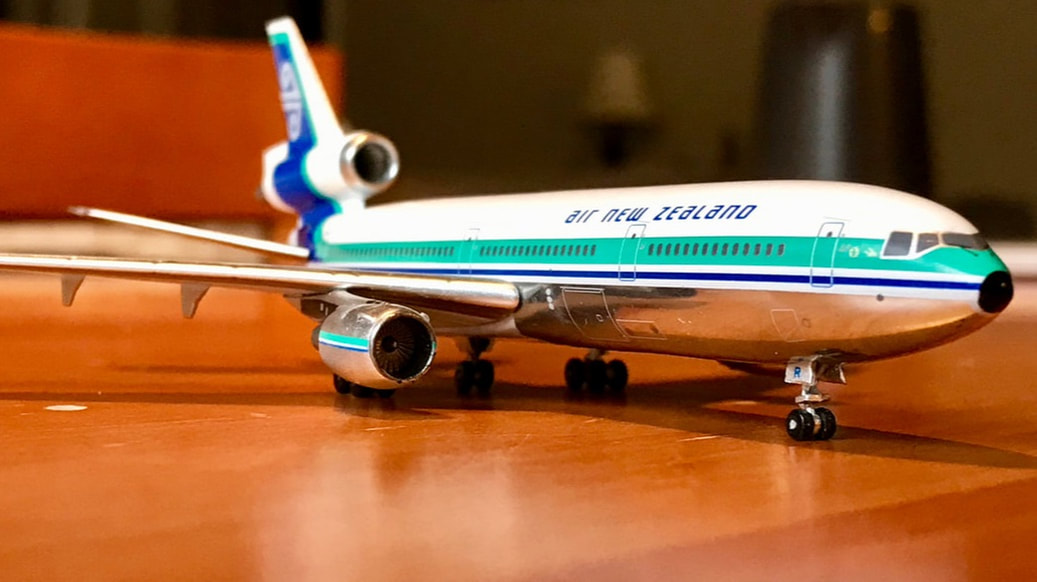 Accuracy:
The reputation of this mould lives up to its name. The thing is so good that flipping back and forth from pictures of the 1/1 to the 1/400 is quite amusing. The front of the aircraft is shapped perfectly. The placement of the cockpit windows is right on the money and the only thing that I can spot out of line is the placement of the black nosecone which slopes down on the model but is square and level on the 1/1.

The mid to tail section of this aircraft is very close in its likeness to the 1/1. Perhaps some slight incorrect slope from the leading edge of the wing down to the inlet cowl. 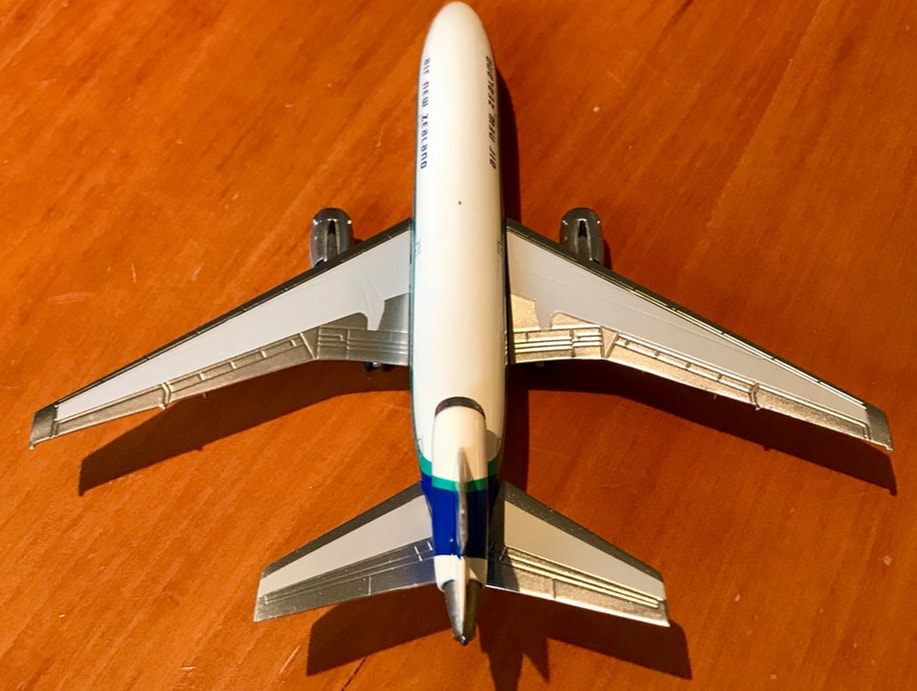 One of the most impressive details in my opinion is the work done to get the flap lines just right. The wings are crisp and well cast.
One final remark on the accuracy of the design. When comparing this model to the other DC-10 I own, an AV400 Cargo Italia, it seems that an area for improvement could be the tail cone of the number 2 tail mounted engine. The rear cone of the the AC version doesn't extend out enough and has been done better by someone else in this scale. Not to mention the improved overall detail of the tail. This however is quite trivial and shouldn't impact a person's decision to pick up this model.
Paint and Printing:
As a collector who doesn't normally spend money on the classics market in this hobby, I will say the old schemes never look that impressive while surfing the web, but once in hand, they have so much character and richness. 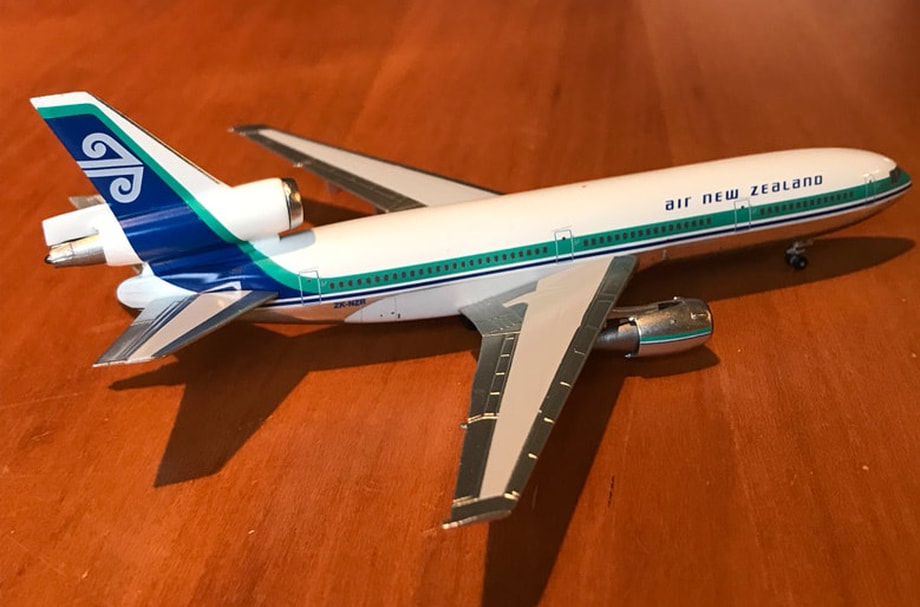 I think the color matching is darn near perfect. The colors on the model tend to look different depending on lighting.
In evaluating the actual finish on the model the first detail, and one that makes the model of the highest quality, is the polished metal on the base of the fuselage. There's no one who can beat Aeroclassics when it comes to the smooth polished metal finish. The execution is perfect and the paint that is applied over the polished metal melds perfectly and smoothly.
The paint application in other areas are very well done. The wings as I've mentioned earlier are not only well cast, but also well painted. The top of the wing has a smooth gray gloss and the leading and trailing edges are beautifully finished. Details on and around the engines are good (a little rough around the starboard inlet cowl) and the painting and detailing of the gears, struts and gear doors are all good too.

If you've been paying attention though you will have noticed the only two flaws I can find as it pertains to the paint and printing (other than the nose cone angle). Both errors are on the port side vertical stabilizer. The first is a ragged edge of white paint at the top of the tail. The 2nd is the presence of an air bubble that's  cracked at the point where the top of the number two engine ends and the tail extends upwards. 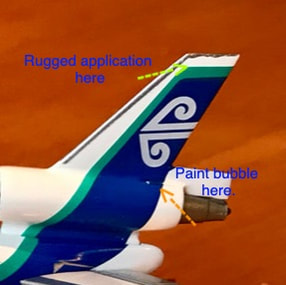 You can also see a misalignment of the teal chatline as it runs from the fuselage to the tail.
I have no reason to believe that these are wide spread production errors, small ones that don't affect my enjoyment or appreciation of the model. Ultimately, it's all about how it looks at about 2 to 3 feet away, a natural distance from which to observe, and from there it looks great. An iconic piece of New Zealand aviation history.
Conclusion:
If you're lucky enough to find one of these and you're even contemplating, pick it up. There is so much history behind these ANZ DC-10s. I didn't even touch on the tragic but fascinating story of how these aircraft were used on sightseeing routes over the Antarctic Circle and the crash of flight 901 on Mt. Erebus. All in all, the DC-10 brought a new level of class to flying in the 1970s and helped turn the newly reformed state sponsored airline of this island nation into a power house that could go toe to toe with any global competitor. Aeroclassics did a great job on this model and again, I highly suggest it to any collector.