DIECAST CURIO
First Impressions:
The Seychelles has a simple yet most interesting history. The Seychelles, an African Island chain of 115 islands is the smallest in population compared to any African sovereign nation. However the Seychelles is not short on vibrant culture and beautiful scenery. As a result the airline, that is basically shared between the Seychelles government (60%) and Etihad Aviation Group (40%), is not hard to pick out in a crowd whether that be in the old livery or the new.

Up for review today is an Aeroclassics attempt at the Air Seychelles A300-200 (1980s-00's livery). This airframe which was initially issued to Air France in 1979 but would go on to serve with about a 1/2 dozen other suitors before her tragic end, served with Air Seychelles from 1985-1987. This 2014 effort by AC, is an homage to a mould that has been bread and butter for AC as well as a reminder of AC's willingness to make something no one else typically would.

​The model itself is based on the overall superb Aeroclassics mould. The mould first saw action in 2007. It's premier release was a China Eastern Airlines A300-605 Reg. B-2318. Once on the market it rendered older moulds from likes of Dragon Wings and Herpa models rather redundant. AC improved on these efforts from other manufacturers with an all metal construction, and more sophisticated gear legs and tampo printed details. It is also an example of a cradle mould that still can compete in 2020. 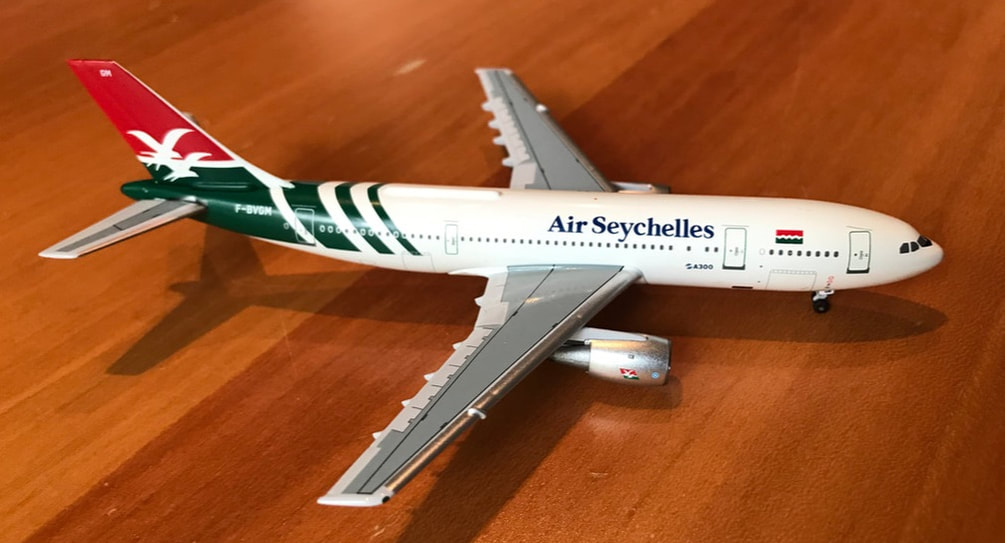 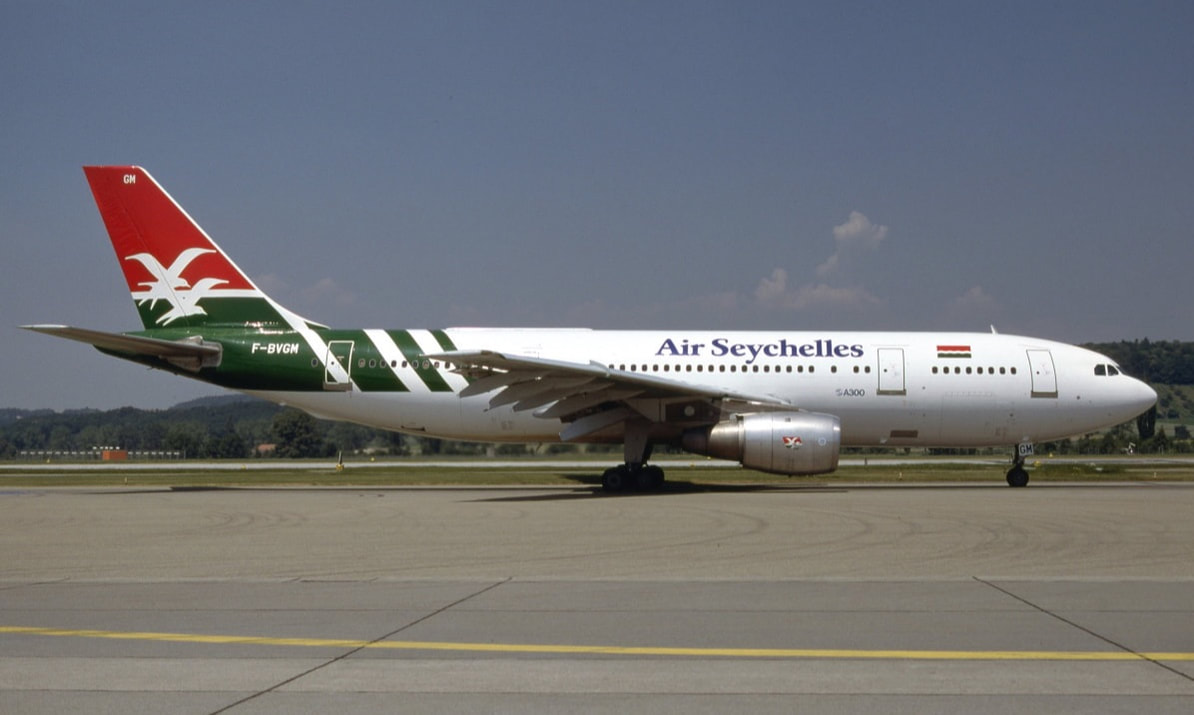 Photograph by EricG. F-BVGM seen in Zurich, 1986. (Airliners.net)
Construction:
As those well versed on Airbus history can attest, this aircraft is the first child of the Memorandum of Understanding (agreement) that created Airbus and was signed by Britain, France, and West Germany. The company was formed because while each country recognized the need for a wide body aircraft, by each attempting to create their own they'd likely fail to turn any kind of profit as a result of the competition three different wide body aircraft would create. The A300B4 was really the third iteration of this aircraft (after the A300B1 and A300B2). While the A300 first flew in 1974 (some 7 years after work began on this joint project) this particular A300B4 variant is an evolved form of the first frame that flew. The B4 is primarily known for a central fuel tank and it came standard with the newer Krüger flaps modification. This A300 also came with the standard GE CF6 engines which were also used on the 747 at the time. This Euro wide body aircraft which was built to compete (at least in pax volume, it couldn't compete in a long reach competition) with the 767, marked the beginning of a global powerhouse in Airbus and changed the airline market for good. 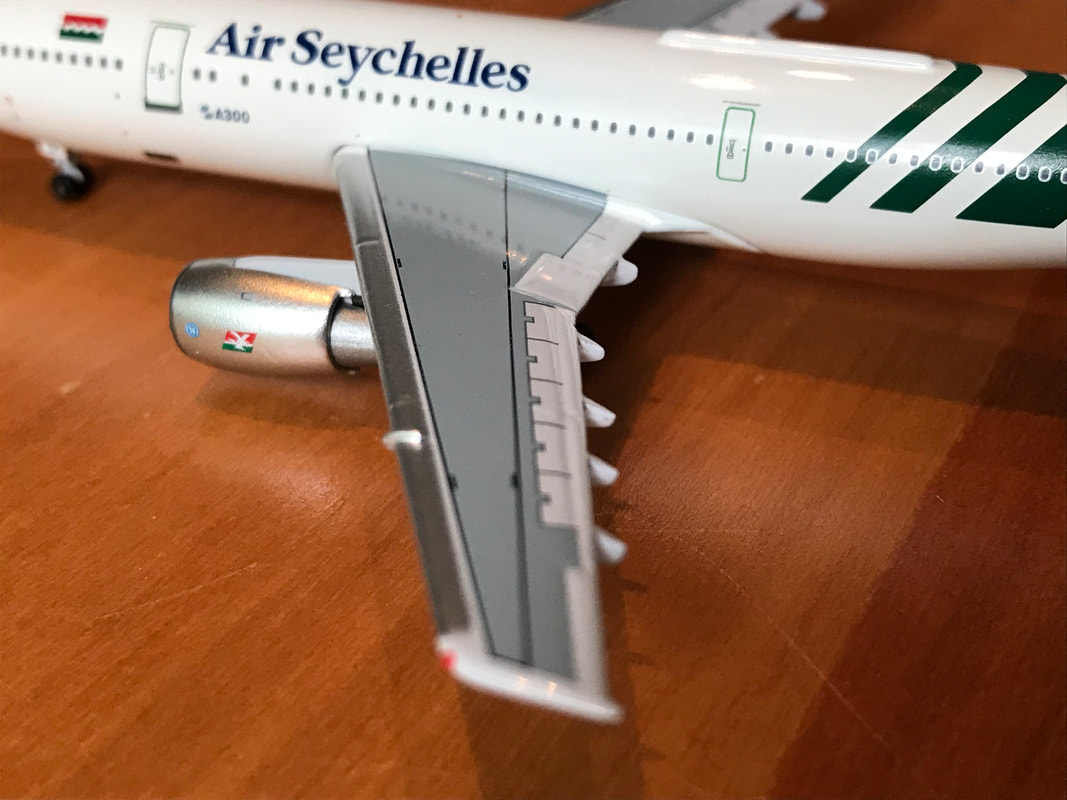 In 2014 Aeroclassics was doing arguably some of its best work. AC was hitting well on most of what collectors wanted and cared about. Not only releasing many desired models but finely crafted ones as well. F-BVGM was released with a flurry of other A300s, many of which are very hard to come by now.

Ref. from DiMA Database
​The problem with cradle moulds, is that if they aren't machined (sanded/polished) correctly, or if the person assembling them is careless, the mould components just don't line up correctly and it can create an unsightly gap in any number of locations. Fortunately, my copy which I was able to pick up from a collection sale arrived in perfect condition. All the other components of the model were also not only well made, but properly assembled. Gears and gear wheels, stabs, pylons and engines all look great.
Accuracy:
The Aeroclassics A300 mould really is the best you can currently find in my opinion. To me, there are three key components to the A300 that make it unique. The first is the nose. The nose of the A300 sets the tone for the many wide body aircraft that would descend from the A300 and AC has done a great job here.
The only thing that can really be said is that the cockpit doesn't angle down steeply enough and the way the windows are printed on the model doesn't give the actual mould the chance to show how good it really is. Other aspects are good as well, the gear is properly placed on the mould and is the right length. The gear doors are the right size on the model (a make or break detail). The nose could stand to be a pit pointier.

The next most important part of the A300 in my opinion is the wing. The A300 has such a unique flap configuration and that paired with the wing shape make the aircraft very recognizable. 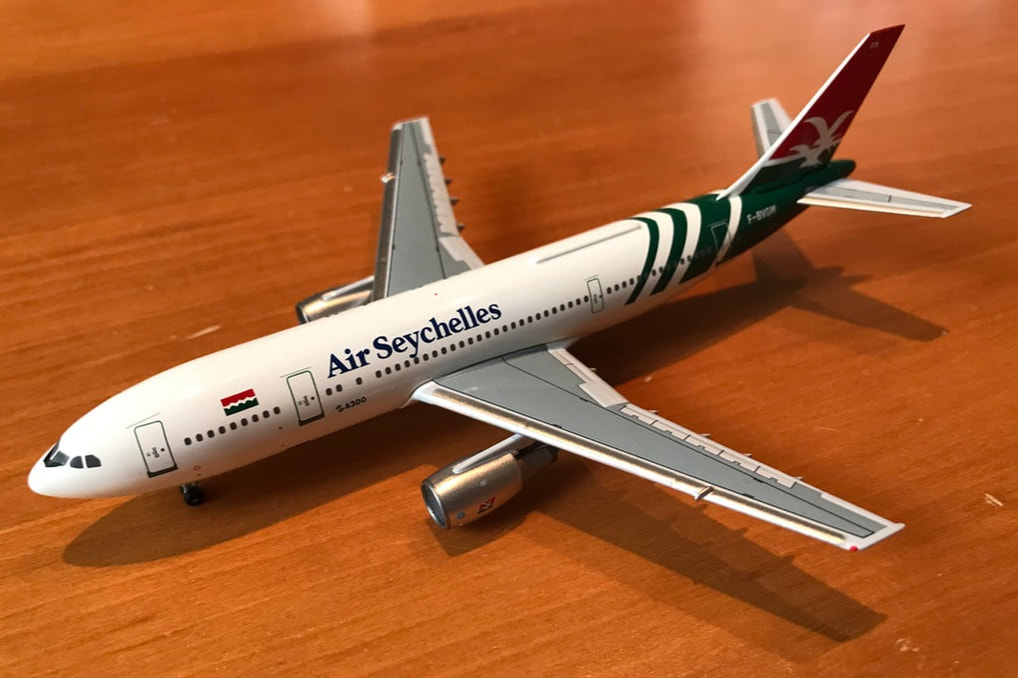 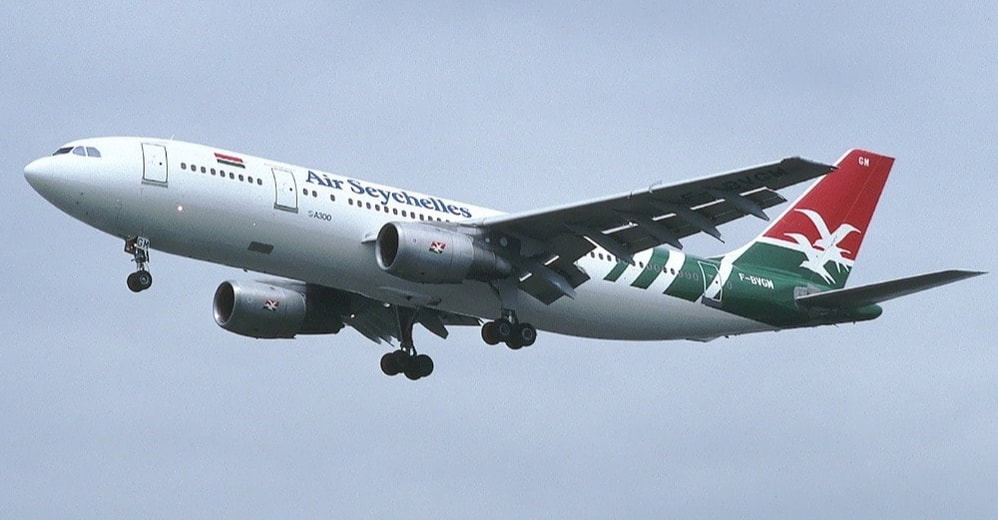 Photograph by Johan Ljungdahl. F-BVGM over England, 1987. (Airliners.net).
In this particular case, AC's printing and moulding work in unison to properly show the unique wing profile of the A300. Further, because the wing is so nicely moulded, it allows for the paintwork to demonstrate the Krüger flaps. Once again, well done.

The final detail distinguishing this aircraft from many others is the long angle the fuselage takes as it makes its way back to the tailbone. Without the right gradient or rate of change from mid rear fuselage to the absolute rear, it's not a true A300. AC has done this as good as anyone and is the best is 1/400 hands down. 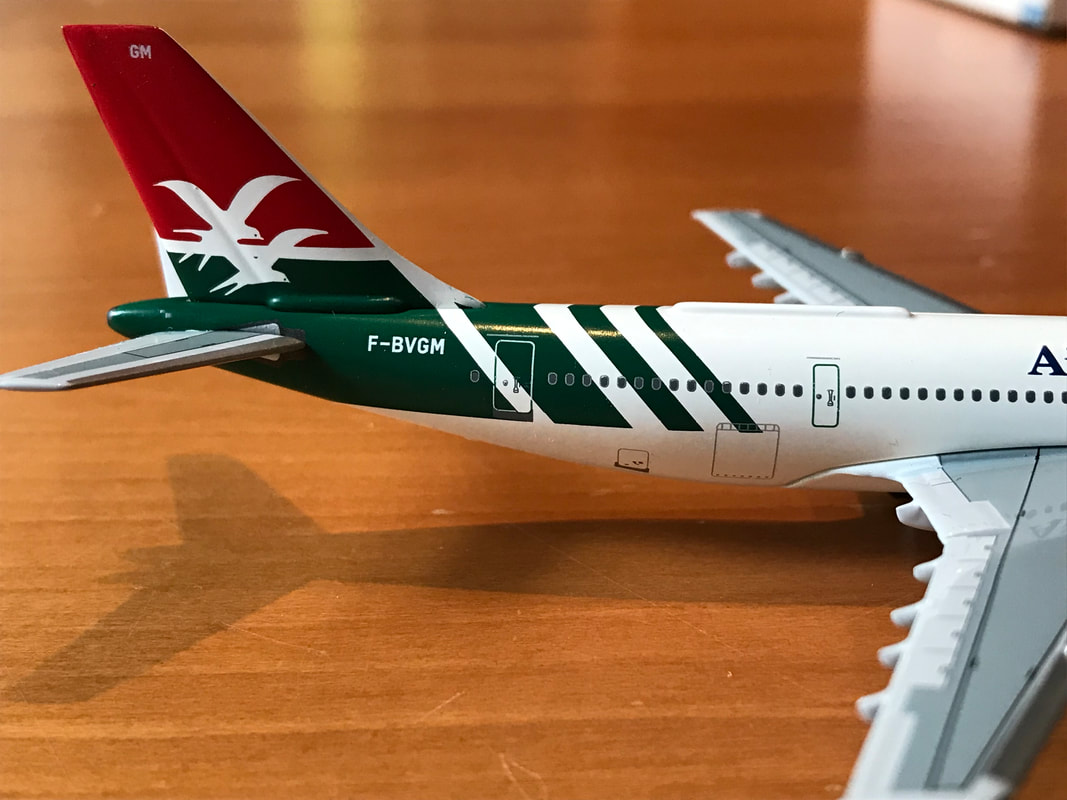 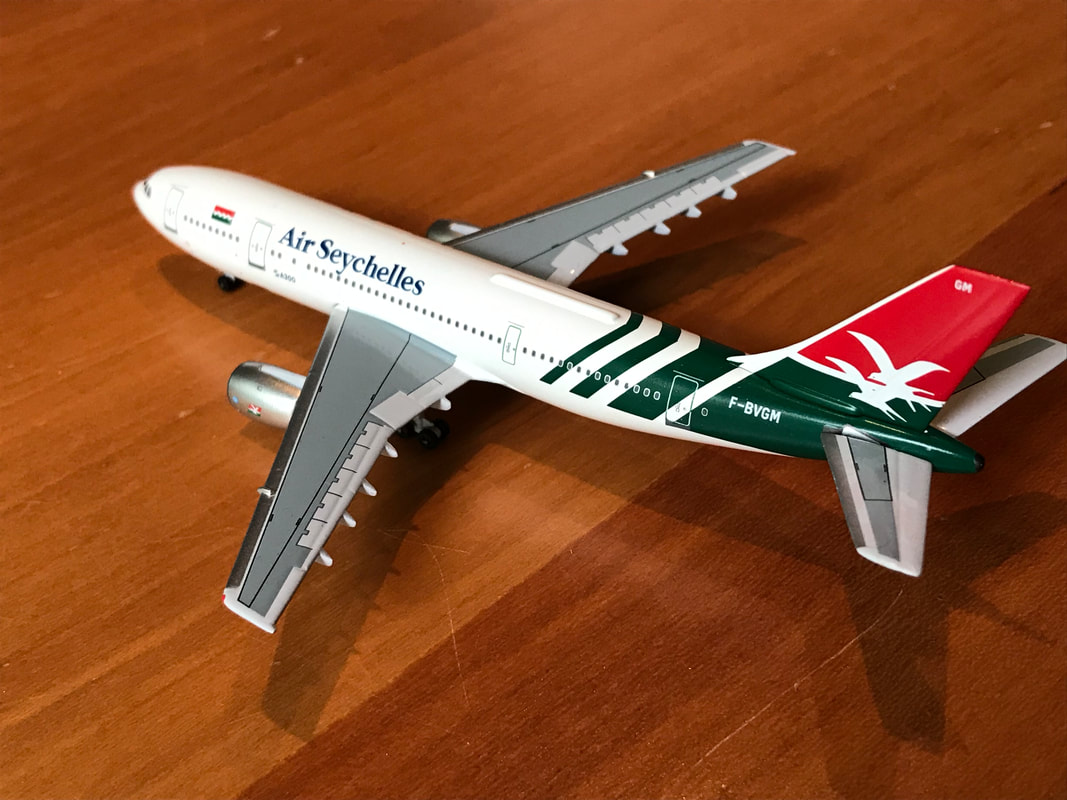 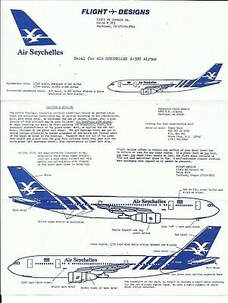 ​Paint and Printing:
As I write this review in the year 2020 effectively marking this model as now six years old, the job done by Aeroclassics on the paintwork matches with what was commonly done and widely acceptable in the year 2014. All windows and doors are well done minus the aforementioned cockpit window issues.

The Seychelles, only being inhabited since the 1600s and recognized as a independent and sovereign nation since gaining independence in 1976 has had three flags. The second of which (demonstrating a political change in 1977) is present on this aircraft's front fuselage between the number one and number two left side doors and sets the tone for the livery used by Air Seychelles until 2011. The flag is the correct shade of both green and red but the wavy white center horizontal stripe isn't quite done correctly, but that's splitting hairs. The whole flag itself as well as the livery is a bit on the dark side but it certainly isn't bothersome. The airline logo on the engine cowlings and the airbus logo on the lower fuselage are also good. The font used for the main airline titles is correct and the placement is good as well.
A pair of white terns, the national seabird of the Seychelles, fly over a red, green, and white field arranged in the same way as the  second national flag. Just as in real life, the birds are featureless except for two black dots to make the bird's eyes. The three green stripes that run up the fuselage starting at the vertical stabilizer of the aircraft all look very close to perfect in both their thickness and shape. They end in the correct location as well, about half way down the fuselage.

The overall paint application and printed on details really make this classic A300 a winner. As I mentioned earlier the cockpit windows take away from the mould in a small way but the over all details are really good and the over wing printing is superb.
Conclusion:
Usually, when collecting, I start on something modern and gather classic models as I learn the heritage of an airline which was the case with this particular model. African airlines consistently boast interesting histories and some of the best liveries. Air Seychelles go on to outdo themselves in 2011 when they roll out their gorgeous current livery refreshing many aspects of this livery. 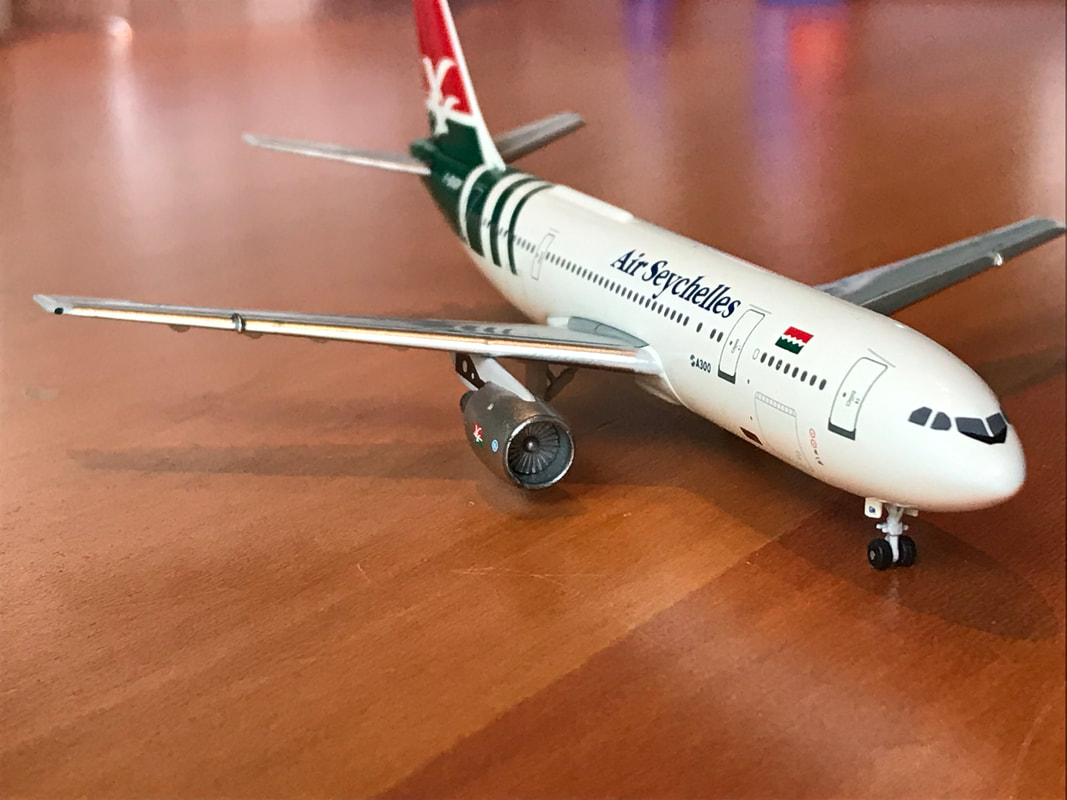 The fan blades seen here are the older looking silver, but they aren't off-putting.
This A300 is probably an 8 to an 8.5 for me on a scale of 1-10. If any commercial aviation enthusiast is interested in African carriers or the Seychelles, this one is a must have. I'm hoping one day for the 767 (and 757 NG, you listening?) carrying this livery to be made and I'm actively on the hunt for the 707 made by AC. In the between time F-BVGM sits nicely next to it's younger siblings. While the frame itself is long gone, the livery itself is firmly ensconced in the history books of the Seychelles. 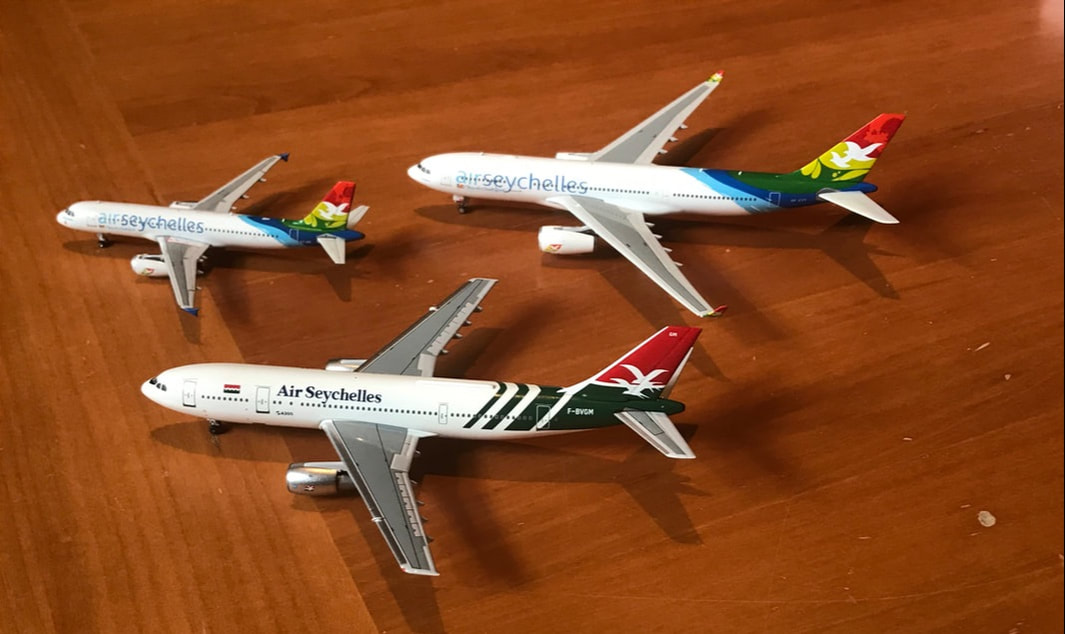 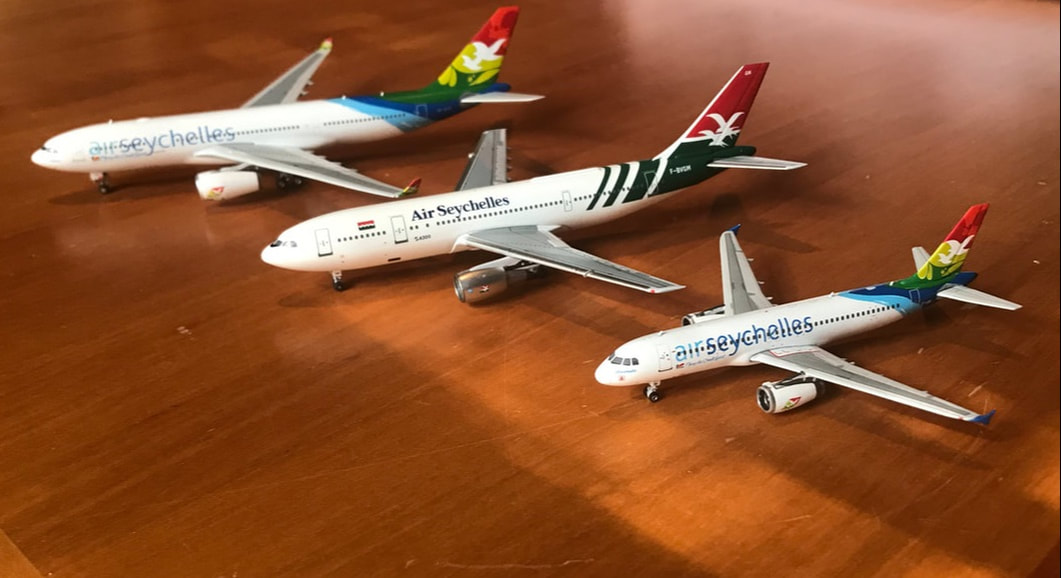