DIECAST CURIO
First Impressions:
It has taken a while to come up with an approach to reviewing this brand new model based on a brand new airplane, from a very new manufacturer on a brand new mould which has even been packaged in a unique way. There are all these different components that can be looked at and expanded upon however the goal is to keep focus on the model itself while simultaniously informing on all the newness.

I received my first NG models just a few weeks ago; a pair of 787-9s, this one as well as Juneyao B-207N. Saying that NG Models has received a fair amount of hype in the 1/400 community would be quite an understatement. Many have lauded the company for going into places where others have tried and failed and also, not tried at all. There is a lot to digest and make sense of as I sit with the model before me.

B-1168 is the 787th Dreamliner by Boeing and is so aptly cloaked in a design commemorating the accomplishment. She first flew in December and was delivered in the same month. The airframe was originally purchased by the aircraft leasing company, AerCap and partnered with China Southern who signed the lease agreement for the aircraft on or around the 13th of December, see here. (Boeing Media). Just one day or so after the aircraft is credited with its first flight.

Since she began service with China Southern, B-1168 has been serving major airline destinations like Shanghai from C.S. airline hub, Guangzhou. China Southern looks to deploy their 787s long into the future as several more (12) 787-9s are scheduled to be delivered through the year 2020 bolstering strength behind their current fleet.
This is the 10th effort for NG Models on the 787-9. They first launched a small sampling of their tooling back in October 2018 and followed up with a soft launch releasing in limited quantities the Qantas "Yam Dreaming" 787-9.
In the beginning of this venture, there was a lot of doubt cast regarding how NG could possibly build a mould capable of competing with existing (high quality) moulds owned by major players in 1/400. Something that once seemed to be a pipe dream quickly materialized into a viable market ready solution for 1/400 collectors.

The effort hasn't been without interruption. As a consumer in the U.S., getting one of these models has been challenging. Many regular distributers seem to be under constant scrutiny and pressure not to list NG Models for sale for fear of losing distribution contracts with other manufacturers (Gemini Jets). Hopefully continued cooperation with the collectors and a steady stream of revenue will give NG Models a new weapon to compete with on the overall model aircraft market. A few months in and I'm eagerly awaiting the Chinese New Year to cease so that production of the 787-9 may once again return to normal pace and more NG ideas can come to be. 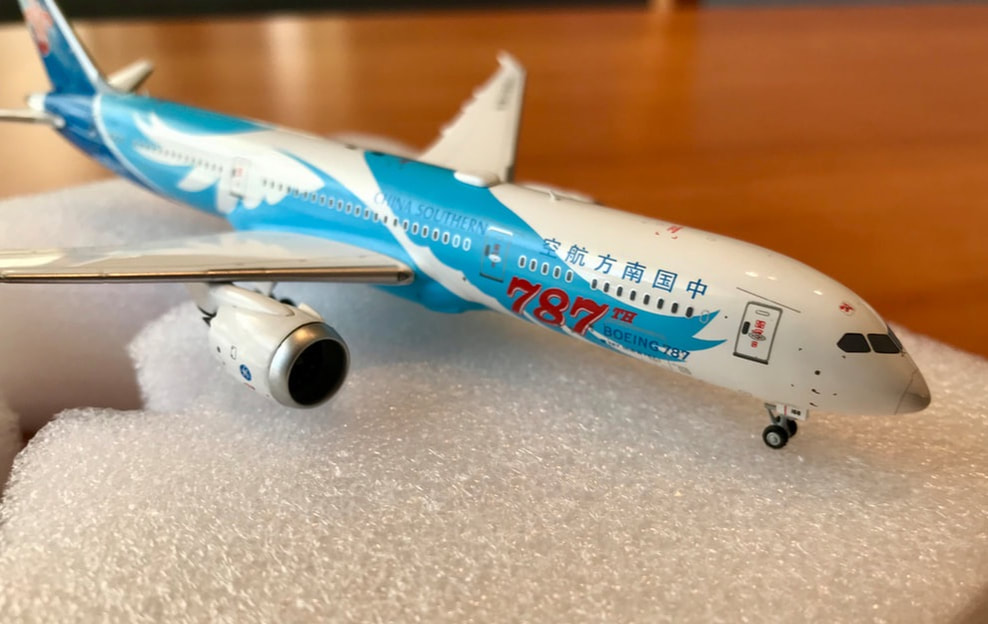 The Box:
For starters, I really like the new exterior packaging that NG Models, or Next Generation Model, puts their models in. I think that they have studied the completion well and in my opinion have mostly adopted an exterior packaging strategy that resembles Phoenix Models. The box plays on the high and low colors on the model and incorporates them into the design. There's also a nice computer render of the model on the cover and the box opens on either side.

The most unique aspect to the packaging is the decision to use a foam cradle instead of the standard plastic tray all the other big 1/400 players use. A few thoughts on this:

Pros, it looks neat, professional and does away with all the pesky slips of plastic that cover a plane from tip to tail. It also seems to give more general support to aircraft components and seems to provide far more protection in the instance that not all the model pieces aren't properly glued.

Cons, the model can be very tricky to remove from the foam cradle. The model is very crisp and as a result has several very pointy features. These easily get caught in the foam. Also, I worry about the decision to let the delicate gears suspend freely underneath the model in the hollow bottom of the cradle. The foam doesn't seem like it will provide long term protection from moisture or deterioration the way the plastic trays will.

Altogether, the packaging is well done, clean, and the branding on the box is very professionally done. I think these details help the sale value and the resale value of the model to the discerning collector.
​First Seen:
The 787th 787 registered as B-1168 upon delivery to lessor China Southern (6th largest airline by passengers carried) was first seen in action December 4th 2018 running tests.

Photograph by Alex Jossi, Courtesy of Airliners.net. (Dec 4th 2018).
Construction:
Once removed from the foam, upon first inspection everything looks great. It's always nice when something seems to live up to the "hype" and the fact that everything arrived intact once unwrapped is a great start. The body of the aircraft is all metal. Both precisely machined wings are securely fastened into place on the joint-slot mould. It's my opinion that NG currently has the most precisely fitting wings as a result of the way the fuselage bows out at the wing joint.
Following close inspection of the wing attachment, other aspects of the connection points on the model are great as well. Stabilizers and engines are firmly fastened. Gears, gear doors and tires are good. There are no tire tabs and there is no evidence of any of these smaller components being crooked or otherwise malformed. Lastly, all of the finest pieces (antennae, sat-nav dome) are sharp and fitted to the model.

Does the NG Model live up to the hype of its build quality and quality of workmanship? Absolutely. I truly hope that NG can be a factor in ending the very poor quality control running rampant in the hobby. I will gladly pay the extra cash for a model built as well as this. It can be done! 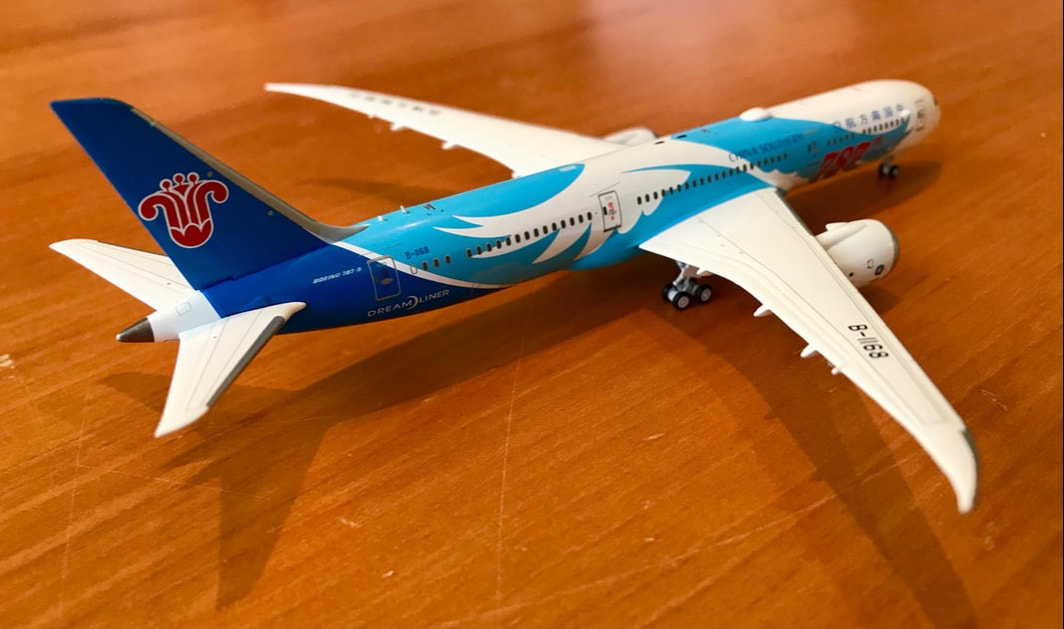 Accuracy:
As strong as the NG 787 was in its construction, it is just as good, if not better in its trueness to the real 1/1. The accuracy and likeness is primarily accomplished in a few distinct features of the aircraft. The first main feature is the nose of the aircraft.
Even though the angle of these two pictures are different, there is a lot of visible proof that the design of the front/nose of the model very closely resembles the realities of 1/1. There are a few clear issues with the paint and printing but I'll get to them later if you haven't noticed them yet.

The over all nose of the model is very perfectly sculpted. the nose cone detailing looks like it may be slightly off due to angle of printing, but the overall shape is just shy of perfect. Going up from the nose, the cockpit placement if not perfect is just a hair too far from the nose cone but the fuselage rounds up towards the main body exactly as it should.

Below the cockpit and just before the main door, the nose gear and gear doors are perfectly place and, they are more to scale than almost any other gear doors I've seen on a model. Getting these little features just right is outstanding craftsmanship.
Besides the obvious difference in lighting, and slight angle difference in these photos, (1/400 on the left, 1/1 on the right) once again, NG has created a remarkably similar model. The engines themselves (another distinctive feature) are darn near perfect, perhaps just one single tooth short around the back end of the cowling. The rear components of the engines look great as well, perhaps the tail cone is a bit too skinny and a bit too long. I also think the pylons are not the right shape and don't arc enough from the leading end that suspends the engine to the tail end that mounts it.

​The landing gear doors are really well sculpted and generously painted (many gear doors these days are not. They are very appropriately shaped and properly placed. While I love the quality of the tires and wheel hubs, I think the wheel axels and wheels themselves are too far apart and the space between the tires is too big.
I've spent a lot time looking and comparing the tail sections here and virtually everything has been done correctly. The height of the tail, the slope on the top edge of the tail stabilizer. The over all features of the tail of the plane look spot on. Further the horizontal stabilizers are perfectly cast and perfectly painted. The antenna pieces on the top of the fuselage before the tail are also very well done and appear to scale.

I am truly stunned at both the quality of the mould and the accuracy of the model. Most models on the market today take several adjustments to truly be awesome. The fact that NG Models seem to have developed this and released in the time that they have is truly a remarkable thing.

Some minor separation of the cowling inlet to the cowling over engine 1.
Paint and Printing:
The only downside to this model is classifiable here. There aren't many issues with the overall paint application and quality of the printing. But there are a few. The worst of which (if you were really paying attention) was shown earlier. The most special thing about this aircraft are the "787th 787" titles and NG have messed up on the "Boeing." Also, there is a really unattractive line where the print work comes together atop the fuselage.
There are a few more things that didn't go well either. Most of the doors frames should have a white frame and said door frames appear to have the right amount of gray, but are missing the white boarder. Also, the amount of paint on the wings seems to be just a little too thick. This causes the overwing detailing, specifically the joints between wing parts and flaps loose definition and thus detail. Overall however, this aircraft will stay in my collection. I'm so pleased to have such a neat, clean and WELL crafted model that does what it's supposed to, turn heads.
​Conclusion:
These days, anyone who is anyone in the 1/400 business has a 787 mould that they are competing with. So can NG compete with what they have? In my opinion, absolutely. For a company this new, to be creating at this level is virtually unheard of. The trick now is about sustainability and how NG can impact the overall 1/400 market that is in need of quality models being brought to collectors in innovative ways. This puts pressure on the older slumping producers to improve and innovate their products as well; a winning formula for collectors.

I look forward to the bright future of this aircraft in 1/1 and plan on enjoying this 1/400 tribute for years to come. 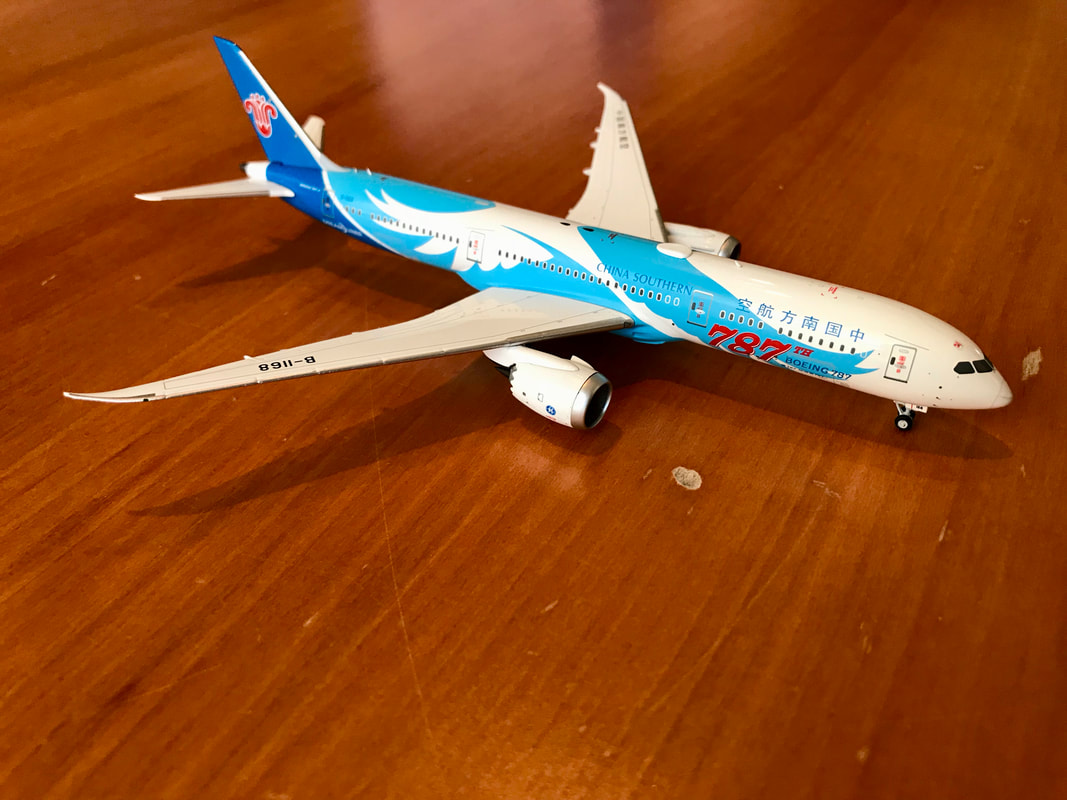