First Impressions:
In November of 2018 Aeroclassics quietly dispatched their fist ever 1/400, Boeing 757-200. Two different registrations in fact were released, an AeroPeru (XA-SME) and Aeromexico (XA-TQU). These were made in limited runs of perhaps just a few hundred each. Many in the collecting community noted that they were strikingly similar to what NG Models had been making as they (NG) kicked off their foray in the 1/400 market creating one hit after another on the underrepresented aircraft.

A short time later it was declared by Mr. Stretton, known avid model blogger and collector, and confirmed by Aeroclassics director and owner Mr. Kline, that Aeroclassics had purchased reportedly several thousand pieces of the new NG mould. This was widely accepted and celebrated by collectors as hopefulness for many unmade 757s grew. The first few models fell a little shy of what many were expecting however. The first and most notable difference was the lack of aerials, something Aeroclassics rarely employs on their principle belief that they don't enhance the model on this scale (debatable). But the bigger problem in my opinion is that the finishing touches and detailing as it pertains to the pant and printing on the models just wasn't that good. I bought both examples and will one day add them to the site, but both came with glaring errors.

The subject of this post seems to be the penultimate (9th out of 10 total) product born from the deal with NG models. Aeroclassics, between November 2018 and February 2019, have released 10 total registrations on the mould and the last and most recent was a Sun D'or (El Al subsidiary) 757-200. No more 757s have been made or announced so is Aeroclassics at the end of their NG supplied stock pile? Just as importantly, was Aeroclassics able to improve on their product as time carried on? Finally, was this a successful venture for Aeroclassics? 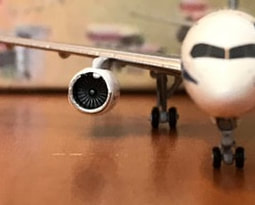 Construction:
In recent months, Aeroclassics have made notable strides in the quality of their product in general. While in my experience they rarely put a product on the shelf that falls to pieces in the way that some Gemini and Phoenix models tend to do, (some of AC's 'baby bus' models I've found to be a bit shoddy) this model was removed from the cradle perfectly complete in it's construction and assembly.

The model fuselage itself is beautifully machined. There are no stray bits of metal and the grinding process has only left clean smooth surfaces. The plastic turbines are moulded well and the cowlings are neatly slotted in order to fit the engine pylons which are also plastic. These plastic pylons are glued to the leading edge under the wing to another slot thats been moulded in the wing itself. One day, AC will hopefully master adding detail to engine pylons, there is room for fine printing and detail. For example, Aeroclassics got the engine type correct (RB211-535E4) but they forgot about the duct work on the pylon, something NG has been able to add on their models. AC misses on the finishing touches here. Also, I'm not sure what happened, but there is a big hunk of plastic on the right side inlet.
Further on, the wings themselves like most models today slot into the fuselage and both wings fit without incident. This is far more characteristic of a good NG mould as opposed to good assembly by Aeroclassics. Below the fuselage belly stands the main gear. The gear doors, the gear struts and tire hubs and tires themselves all fit together snuggly and are well made. The same is true on the front gear set.

Finally the tail section. The vertical stabilizer is perfectly vertical and as you'd expect, slots perfectly to the fuselage tail section. The only other construction critique to add is that both the horizontal stabilizers are attached well and angled correctly, but they don't look all that snug up close. There's a considerable gap here on both sides.
Comparison:
In comparing the construction of AC's first ever 757-200 to it's one of its most recent it honestly appears assembly itself has mostly stayed the same or gotten worse but only by a little. One difference I noticed was simply that the horizontal stabilizers just weren't given as much care when they were installed. This could just be a one of a kind issue but I'm looking forward to soon purchasing my first NG 757s and when they arrive I plan on taking a closer look. I'd imagine that parts themselves were sold to AC and then AC themselves assembled them once detailing was complete.
Accuracy:
​For a long time, your only decent choice if you wanted a 400 scale 757 was the Gemini mould which has taken a number of changes through the years but hasn't been fine tuned until NG showed up as a real competitor. It also seems that Gemini left the "tuning" to JC Wings. It matters little now because no one in my opinion has anything to compete with against NG and this new 757 mould.

One of the most distinct features of the 757 is the nose. Even though it first flew in the early 80's (nearly 40 years ago!) it still looks just as modern as ever. Unfortunately, while NG seem to have done a great job shaping the front of the aircraft, Aeroclassics have not applied the cockpit windows correctly. It's quite clear that the main windshield is angled down on the top edge resulting in a squinty look.
The midsection of the aircraft is pretty good. Side by side once again it's obvious how much detail is absent on the very well shaped pylons. The door size is a bit too large but the window line is neat and tidy. It won't be popular, but I believe that there is too much upward angle in the wings. I still need to take a look at an NG model in person to be sure for myself, but on this example the end of the wing is almost level with the top of the fuselage and that's not correct. Neither is the fact that the blue stripes on the engine cowling comes to a point on the side. Finally the tail section is all very good minus the earlier remarks on the horizontal stabilizers.
Paint and Printing:
To be honest, the weakest part of the aircraft is the part that Aeroclassics I assume is the most responsible for. While it's no where near the worst I've seen there are too many things wrong on this model to glaze over. For starters, as I mentioned earlier, the cockpit windows are just wrong. See the comparison above. I also think AC could have taken the extra time to learn how to print on a nose cone. I will say it seems they tired on the Delta (N642DL) but that flopped horribly. They may not agree with adding this detail, but NG & (HYJL), Gemini, JC all print on nose cones. If they do decide to purchase more 757s from NG, I'd implore them to pursue this.
Other issues include the "50th" logo. The golden numbers are good, nice even but the arching strike through detail is too thick and too dark. As is most of the rest of the printing and coloring on the aircraft over all. The shades of all the blue are off. There is some minor miss application (chipping) on the cheat line around the windows in the area above the wings (this is also a problem spot on other AC 757s). Another glaring issue is the way the blue streak (that runs from the base of the vertical stab forward towards the front of the airplane) changes direction at a strange angle halfway down. And finally, AC still hasn't put any effort into correcting the 3rd cargo door. The being titles and registration on the side of the aircraft as well as some other even smaller printing elsewhere on the plane is good.
Bonus GSE:
One of the many reasons I'll keep on buying models from Aeroclassics is that they do things that no one else will do (or rarely do). I don't understand why GSE in this scale is so hard to find at a decent price and so hard to find in general. I'll admit it is getting better, but in today's age of 3D printing someone, somewhere should be able to make bank by creating an accurate line of model Ground Service Equipment from any era. If I had the time or interest, it would be me.

This set of rolling stairs turned out really nicely. I don't really care for Aeroclassics' diecast GSE and thankfully, this one is plastic. It is nicely painted and perfectly pairs with the aircraft it's meant to service. If there's anyone out there with a photo of this particular air stairs, (assuming it is based off a 1/1 version) I'd certainly love to have a copy to put here side by side. 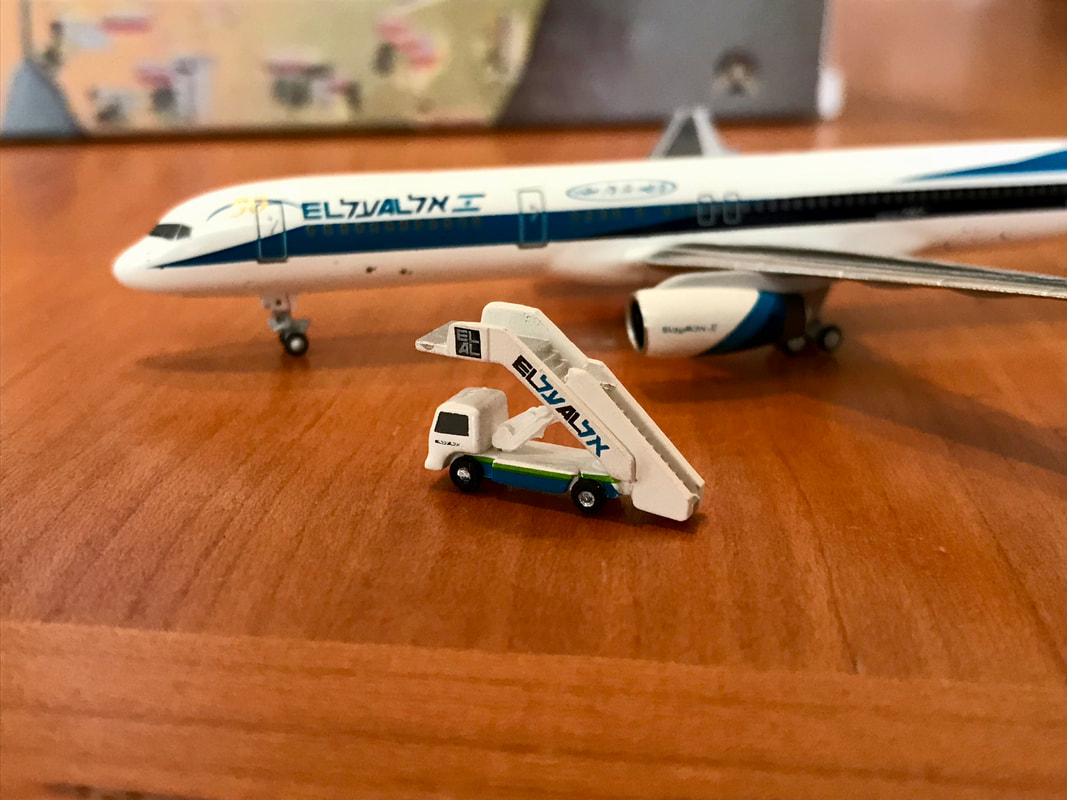 Conclusion:
There were a few questions I set out to answer at the forefront of this article. The first was if Aeroclassics in has gone through all their NG moulds. To that I'd estimate yes. For two reasons. One, is that we haven't seen or heard mention of new 757s from the manufacture in over two months now, and I'd predict that with the new projects AC is rumored to have in the pipeline, there won't be room for a 757 release either. Also, 10 is nice neat number and that's the amount of 757 regs. that have been put out. For that reason I'd say they have run their course if they have released a few hundred of each reg. I can also say the product from start to finish really hasn't improved, nor has it gotten any worse. Hopefully if NG and AC replicate this deal, AC will work on improving their print work. Lastly, I questioned if this was a good venture for Aeroclassics. I would argue yes, but only to a degree. They demonstrated that manufactures can work together to widen the horizon for 1/400 collectors and demonstrated their desire to try new things in what can at times be a very static hobby. I truly hope that they will again soon attempt 757s even better if they're on the NG mould with improved printing, that has to change! 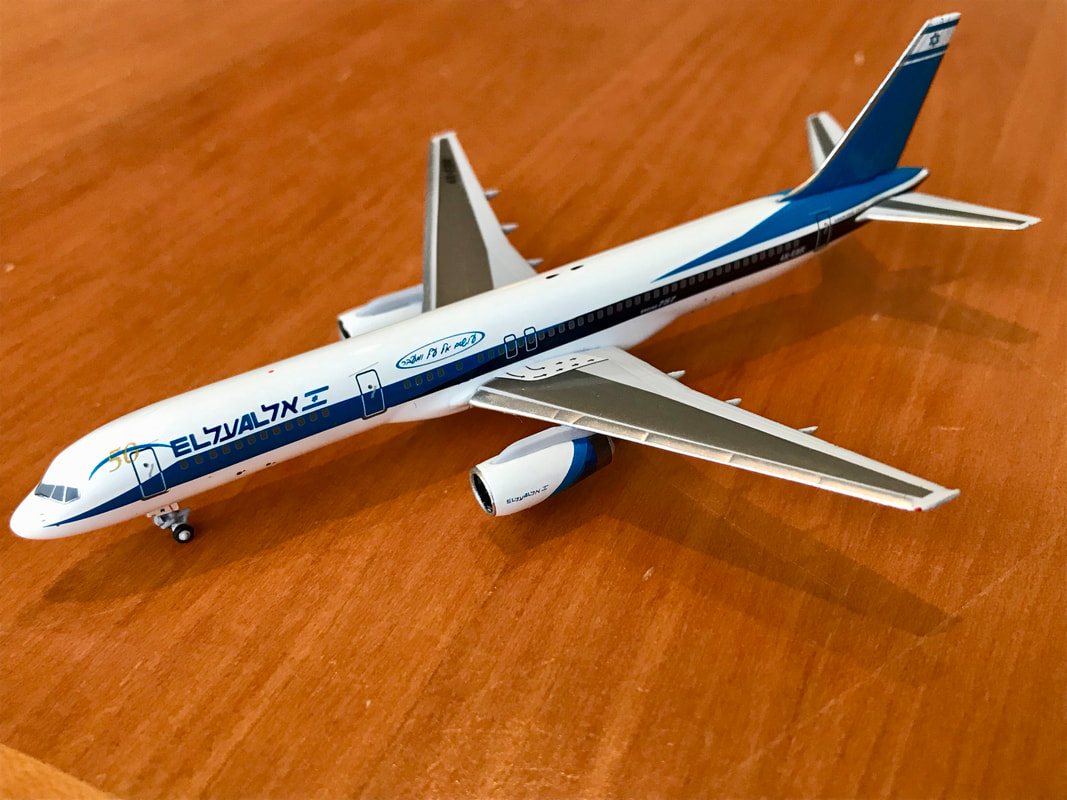