DIECAST CURIO
First Impressions:
Perhaps one of the most interesting things about researching airlines is learning more about the heritage of each one. After just over a century of passenger air travel, a lot has happened and many of today's operators belong to a long and tangled string of historical events which have been impactful in creating the brands we love to discuss.

One of the least well represented countries in my collection is Greece. This is the sole model I have representing this country. A quick look into airlines that have come and gone from this region reveals a long list of enthusiastic upstarts and fast failings. Airlines like Air Greece, Astra Airlines, Cretan Airlines, Euro Air, Fly Hellas, Sky Wings, Venus Airlines, and Viking Hellas Aviation (Rebranded to Fly Hellas) just to name a few, represent a long interest in developing LCC and charters in the tourism driven economy. None of them however have lasted and that's largely because of the long standing flag carrier Olympic Airlines.

​Olympic Airlines has a storied history. An agreement between the Greek government and the opportunist Aristotle Onassis in 1956 resulted in a largely successful pioneer enterprise that brought commercial air-travel to the forefront of Greek society. But the subject today is an aircraft from the modern post government sale of Olympic Airlines and all its subsidiaries to the Marfin Investment Group. This sale ended 35 years of state run operations and the elimination of Olympic Airlines as the flag carrier of Greece. (That title now belongs to Aegean Airlines). 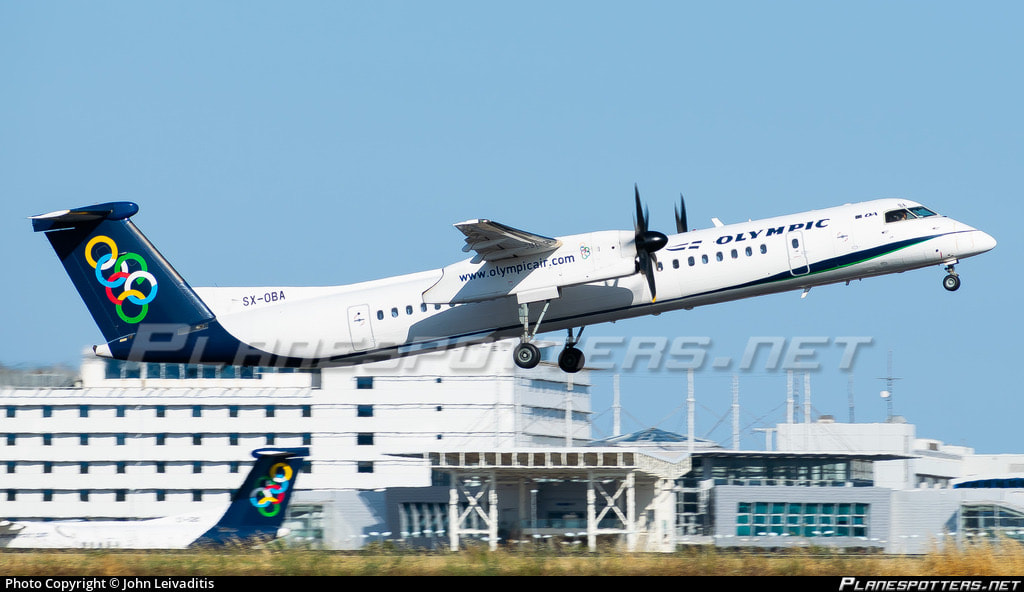 Photograph by John Leivditis, Planespotters.net, June 2020. SX-OBA on rotation out of Athens.
First Seen:
​SX-OBA has had a non-complicated career. In her 11 and a half years of service, all of them have been with Olympic. The airframe arrived for duty in August of 2009. She is seen coasting in on final approach to Kerkyra in this early shot from 2012. 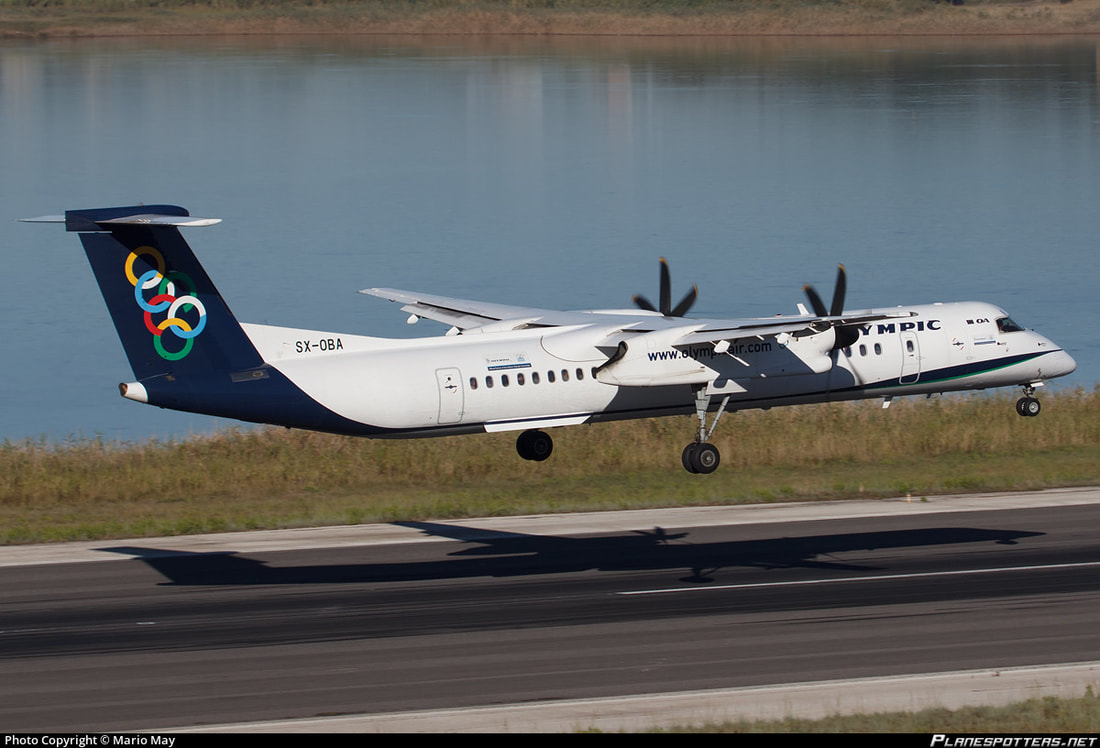 Photograph by Mario May, Planespotters.net September 2012.
​Last Seen:
SX-OBA continues to serve on the regional routes around the Greek islands and mineland. It is a main staple on the Athens (Spata)- Istanbul route. 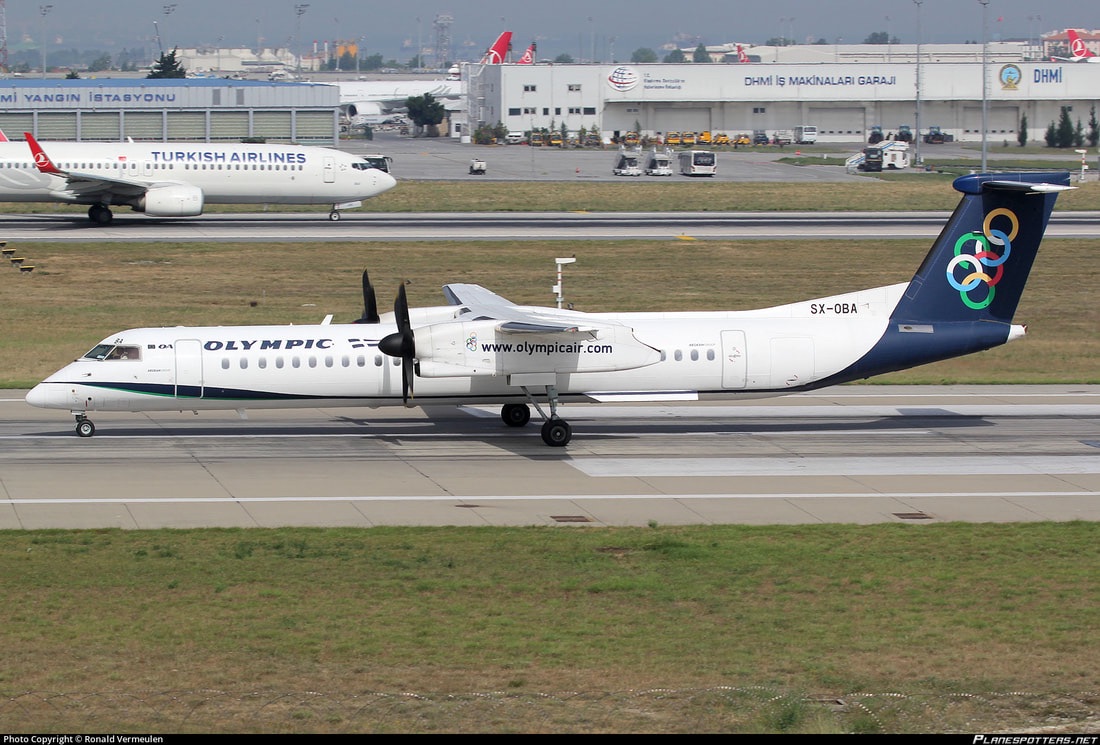 Photography by Ronald Vermeulen: Planespotters.net, Istanbul, June 2018
Olympic Air now operates as a restructured subsidiary to Aegean Airlines. It maintains a fleet of 2 ATR 42-600s, 2 Dash 8-100s and 8 Dash 8Q-400s. Reg. SX-OAB, which is serial number 4267, was ordered by Marfin Investment Group in 2009 on behalf of Olympic Air. It was ferried to Athens via Iceland and then the UK from its production finishing center (or should I say centre?) at Toronto and pressed into service immediately after that. At just under 12 years old the airframe has meet the needs of Olympic Air's island hoping service throughout the Greece.
​
JC Wings produced the 1/400 version of this aircraft in 2011. It was one of four different Dash 8Q-400's that JC Wings made that year in some sort of mould sharing agreement with Gemini Jets. It is apparent that Gemini Jets still own the mould because since these releases, Gemini Jets have exclusively been the only manufacturer to release the 8Q-400 in 1/400 scale. 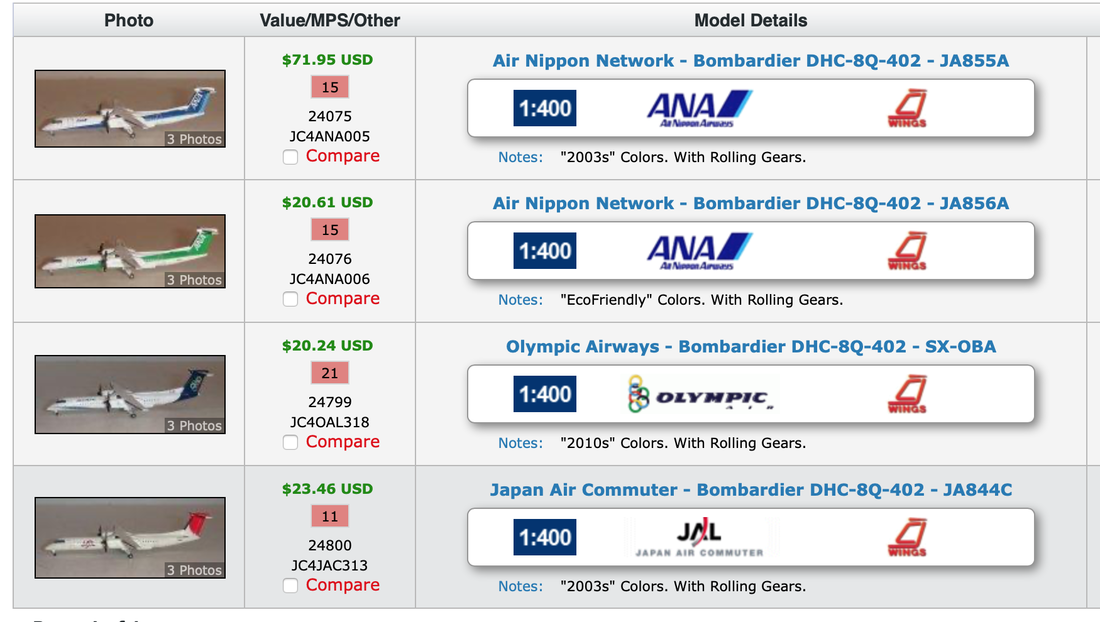 Source: DiMA database/Waffle Collectables. These are the only Dash 8Q-400s Not released officially by Gemini however these are clearly on the Gemini mould. -A somewhat odd bunch all together.
Construction:
To my knowledge, this Dash 8Q-400 mould is the only one ever used for mass circulation in 1/400 scale. This mould in particular has been used a total of 35 times. It was used in 2018 three times and most recently it was used in 2019 for a Horizon Air "retro" scheme. It has not been used in 2020 at all. The mould itself is one of my most favorites. One of the biggest boons of 1/400 scale compared to other scales is how well regional aircraft and smaller prop-liners can be made. It is a certain sweet spot that has largely been dominated by Gemini Jets when it comes to modern aircraft and this Dash-8 mould in particular is wonderful. 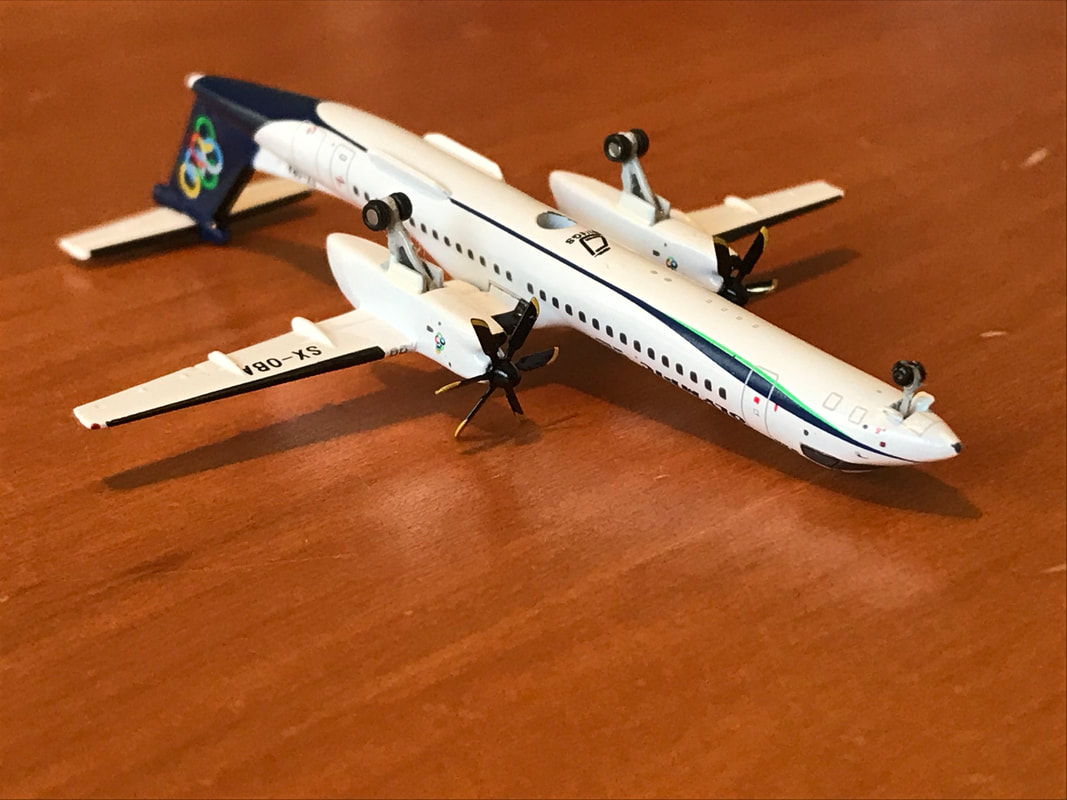 Note the "JC Wings" branding, not normally found on their models.
As many of the components of the mould are tiny there is plenty of room for miscalculation of scale. There is also plenty of space left for error in production and assembly, Fortunately there is no glaring error in the model's creation. The main components of the fuselage and lift surfaces are perfectly pieced together and the main gears are assembled correctly and installed without any issue.

The most standout feature to me though is the 6-spoked propellers. They are razor thin and beautifully detailed. The propellers are a real marvel of this model and a triumph in 1/400. It's amazing that Gemini first published this mould in 2006 and the only adjustment they have ever had to make was to properly angle and configure the propeller blades.
The over all construction of the model is really good. It stands as another example of why collectors should not be accepting of more major mistakes on larger model planes. It doesn't matter if it was JC or Gemini who actually made this model because the standard for construction was well met.
Accuracy:
For 1/400 scale model airplane collectors, there is only one choice when it comes to the Dash 8Q-400. In some cases the lack of a quality mould is a bane for many. In this case it must be a bane for model makers. The Dash 8Q-400 mould built by Gemini is so good no one else it seems has ever tried to replicate or supersede it.

The most imperative part of the moulding is the nose. The Dash 8 has a very identifiable nose with almost no change of angle from the nose to the cockpit window. The model has perhaps a slight under exaggeration in the angle of the nose. A case could be made that the cockpit window isn't printed very well. The front facing windows are ok, but the side facing windows appear to be printed on at an incorrect angle.
Another area of impressive accuracy is how close to perfect the ride hight on the model is. Even today, Gemini struggles with getting this correct on larger models. The new Airbus A320 series NEOs for example have a horrendous ride hight to engine clearance ratio. On this far smaller model, everything is in great shape. An added bonus is the quality of the gear doors.

From the engine to the wingspan. From the fuselage strakes to the tail fins and rudders, this is a very good mould. The location of doors and windows are good as well. I'm not sure how many new moulds were made in the whole of the 1/400 industry in 2011, but this would had to have been the mould of that year. I'm not sure why it hasn't been used more often in the past year or so. There are many carriers that need to be represented on this mould. In fact, I'd argue some of the best schemes left undone in 1/400 would be those that can be found on a Dash 8. To name a few; airBaltic, Air Greenland, Air Tanzania, Ethiopian, LOT Polish Airlines, Nok Air, SATA, TAAG Anglola, and a good bunch more. Hopefully we will see the return of this mould in 2021.
Paint and Printing:
To "come down from the mountain," there are some areas where "room for improvement" would be an understatement. One of the biggest failings in 1/400 that drives collectors mad is chipped paint. Even on smaller models, careful and disciplined quality control should nab paint chipped models from the distribution line in exchange for the expected price points.

If you were paying close attention, you would have noticed by now that the model I'm presenting has with it a disappointing paint chip right on the nose. It may as well be a giant zit. Sadly, the paint finishing around the area where the display stand hole is located exhibits some paint chipping as well. Disappointing to say the least. 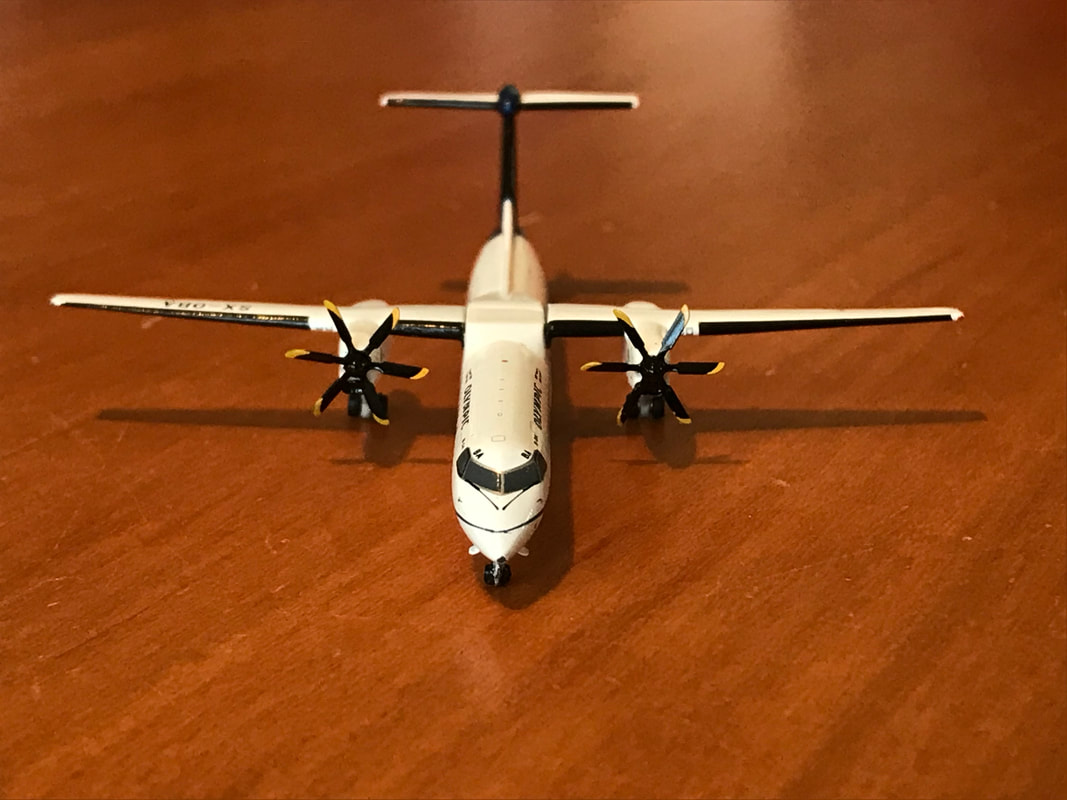 Yet still the model is over all acceptable even based on the paint and printing. The base coat is smooth and beside the paint chips, evenly dispersed. The overall printing of titles, windows, (aside from the cockpit) and doors and hatches are all at or above standard.

There are two main features of this paint scheme. First are first the 6 different color rings on the navy blue background. These rings are a carry over from Olympic Airways. The rings are said to represent 5 continents and Greece (unconfirmed). When you appreciate the scale, the quality of the detail here is average to above average all done in a few centimeters of space.
One more nitpick from me is the missing "www.Olympicair.com" title missing on the engine cowlings, but I'm not sure they were present on the aircraft at the time that this model was made.
​
The most impressive detail in this category is how close the color copying has been. The rings on the tail highlight this triumph. Without the chipped paint, this would be a slam dunk. I'm sure there are other copies out there that don't have these defects. That means if you're lucky enough to come across one of these, I wouldn't hesitate.
Conclusion:
This model represents an untapped market in 1/400. There are at least half a dozen carriers that have no representation in 1/400 scale at all that could be premiered on this mould and another half dozen that would be scooped up by fleet builders. This is my most favorite modern regional airliner available in 1/400 and the mould frequently sits collecting dust. JC/Gemini, please do some research and get this mould back on the market! 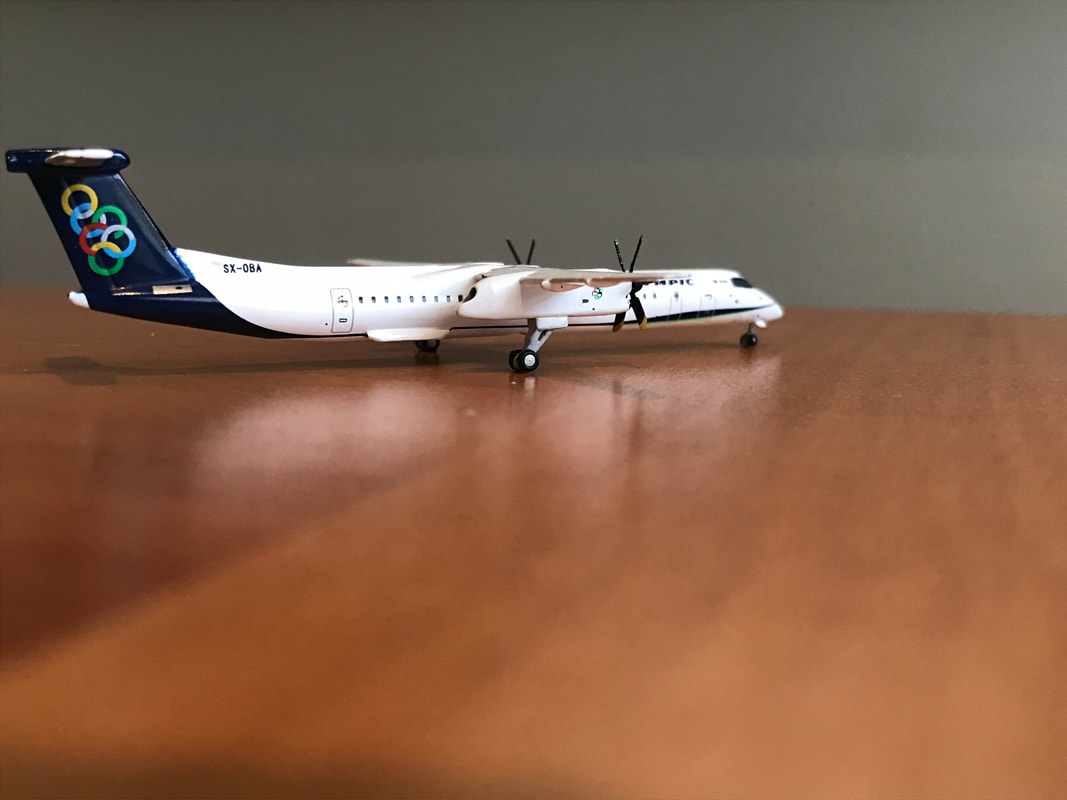