DIECAST CURIO
First Impressions:
Sun Country Airlines was born from the ashes of Braniff International Airlines. In 1983, Sun Country commenced operations. It was first led by husband and wife duo, Jim and Joan Olsen. Jim operated as Chief Pilot and Joan ran all inflight operations. They began operations with a single 727 flying out of Minneapolis-St. Paul and steadily grew through the 80's acquiring more 727s and and their first DC-10 along the way.

Since that time, Sun Country has been the metaphorical 'little engine that could.' The brand has been passed from one investor to another most recently (2017) being acquired by Apollo Global Management which has not only helped to evolve the brand but it has diversified how Sun Country operates. It now is a partner with Amazon's cargo division and provides shipping services to the Amazon network. By passenger volume, it is the smallest major airline in the U.S. (1.7 million in 2020). Sun Country still boasts an impressive route map and a solid group of employees. They themselves, according to this article from June 5th 2018 selected the new scheme found on this delightful NG Model. For even more information on Sun Country's cooperate history, I'd invite you to check this link. 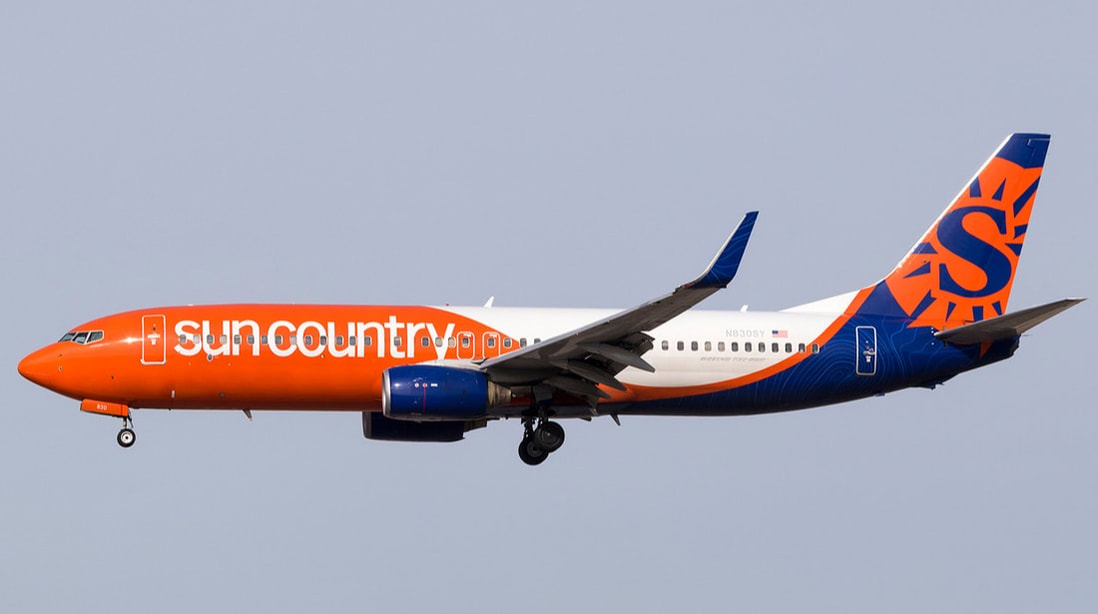 Photograph by Maarten Dols, Las Vegas, 2020; Planespotters.net.
Construction:
​As always, the state in which a model arrives into the hands of the collector is when the primary assessment of construction quality takes place. For me, that is of course a crucial check point. I am a big fan of the styrofoam cradles that NG models has been using, but I'm also very accepting of the traditional plastic shell that is standard with NG Models' 737NGs.

I'm happy to report that my Sun Country 737 arrived in perfect condition. After combing over the model, there are no loose or missing pieces. All components of the model are well attached.  I think NG are often under appreciated for how well the model's assembly alone is handled. As a result of many of their model components being machined to a much finer degree, the precision needed to make a well constructed model is noteworthy and appreciated. In other words, their quality is done at a greater risk of defect.
Accuracy:
This portion of the review is simply dedicated to the quality of the mould and how well the model proves itself to be what it claims to be. So is this a proper 1/400 scale 737-800? A jury wouldn't have to take much time stating that it is. NG has developed this mould (as they have with most of their moulds) from the ground up. So to see that they have such a competitive and handsome 737-800 after just a few years of R&D and minuscule adjustments is fascinating comparing it to the moulds of competitors. Gemini for example are still occasionally using a -800 mould from nearly 2o years ago. Gemini have made adjustments since then, but long periods of time have passed and only the emergence of this new NG mould has challenged Gemini to make further adjustments to keep its dinosaur relevant. 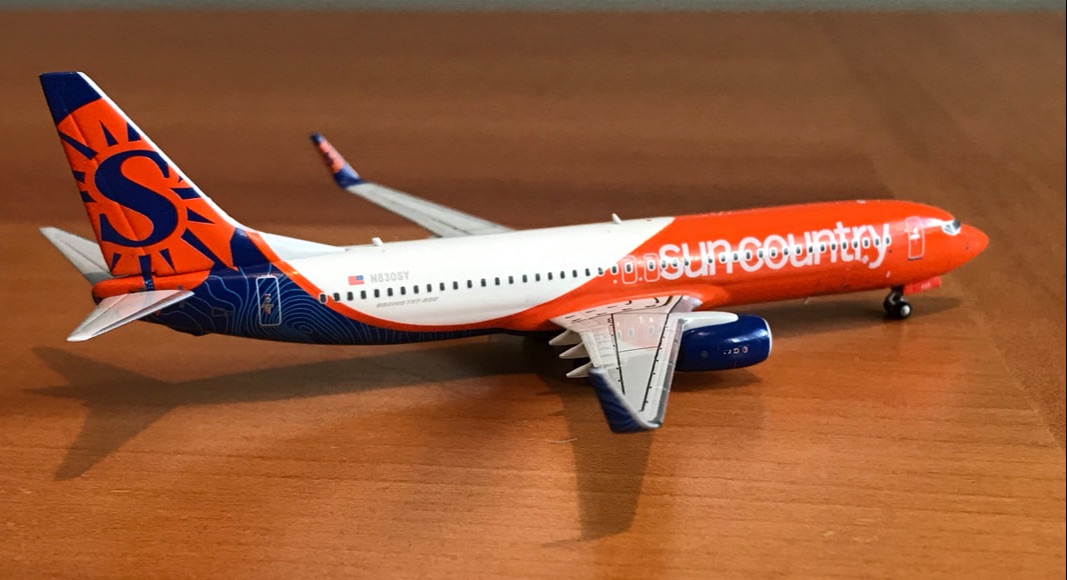 Almost every major component of the aircraft represents the best in the scale. From this perspective, by looking down the wing many features are highlighted. The flaps, and flap tracks, the slats, the over-wing components are all spot on and so is the paintwork.

The tail section to me is the only real area of the main body that could be improved. I wouldn't mind if the vertical stab was a hair thinner. When other parts of the model are so precise, this area feels a bit old fashioned as does the tail strike hump. The overall profile of the tail is good though and once again, the model clearly represents itself as a 737NG. Further, the model represents itself as the best option for buyers of 1/400 scale 737s, and the only option for a Sun Country 737 in this scheme. 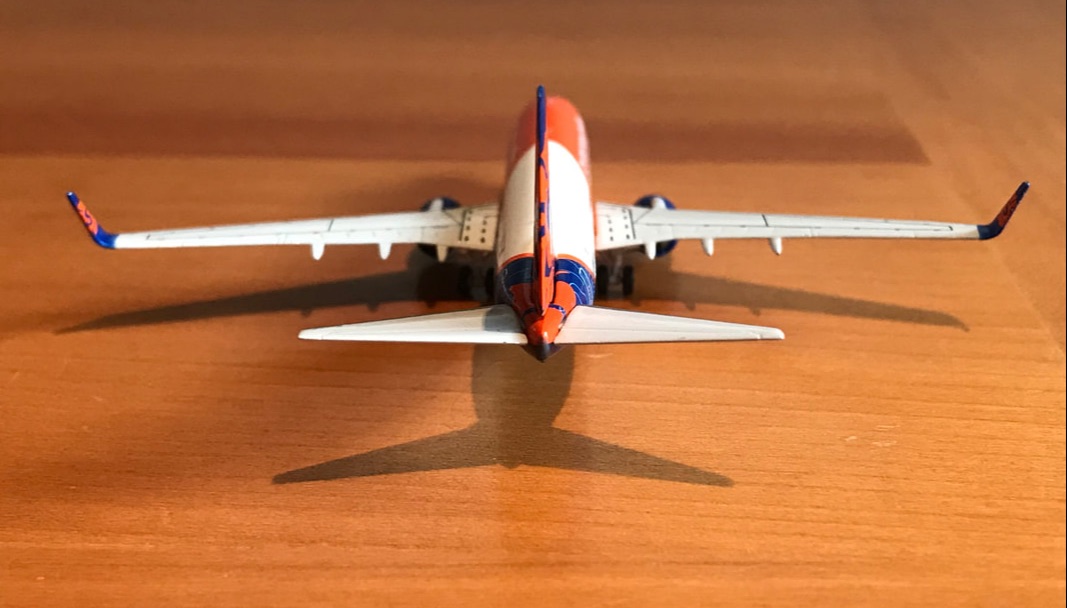 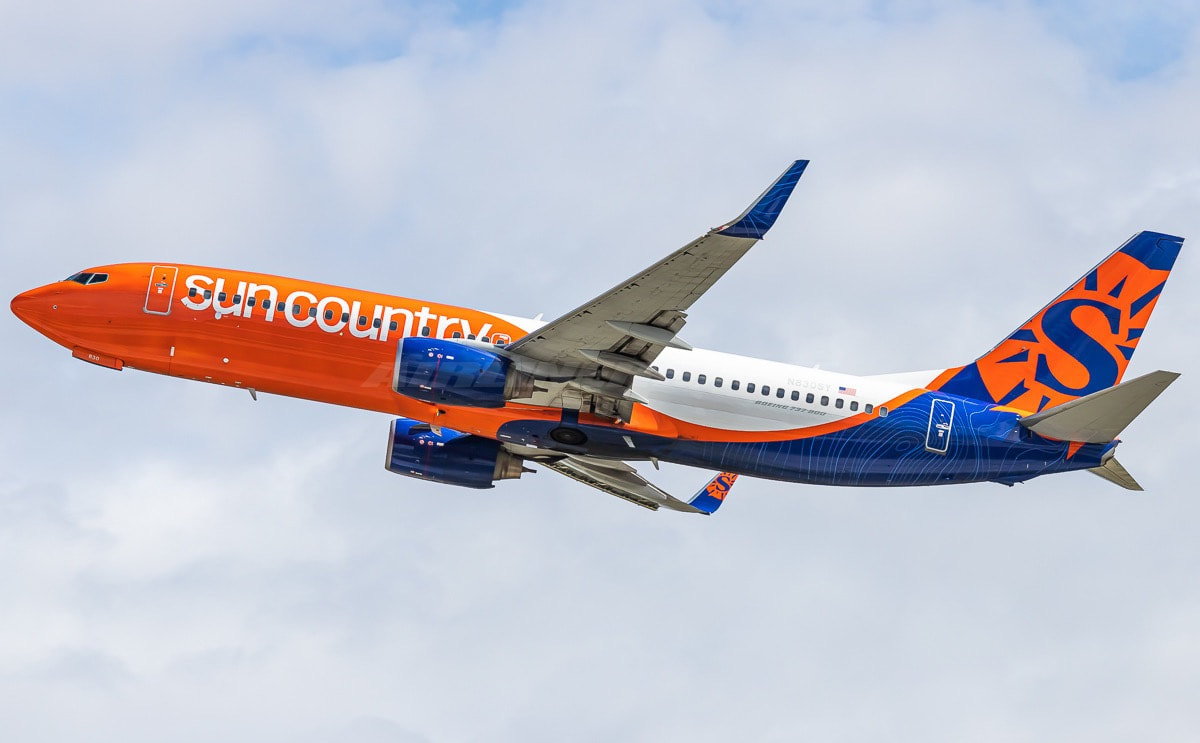 Photograph by Hamza Hasnat, Calgary, Canada 2019. Airliners.net
Paint and Printing:
​In reviewing the 1/1 version of this aircraft, it's not difficult to focus on areas that would be predictably problematic for creating a successful 1/400 clone. The first is obviously the topographical features that make up the rear underbelly portion of the aircraft. I honestly can't find fault with a single stripe. Not only is each line practically perfect in its placement, but each line perfectly bends and curves as it is meant to. Not to mention the blue field on which the topographical features sit is the right color and so are the light blue lines. There is no cheapening of the product here, I'd wager that if I really got to counting each line, they'd all be there. This is a stunning accomplishment and a one hit K-O to the likes of Gemini and Aeroclassics, they cannot compete with this kind of precision. 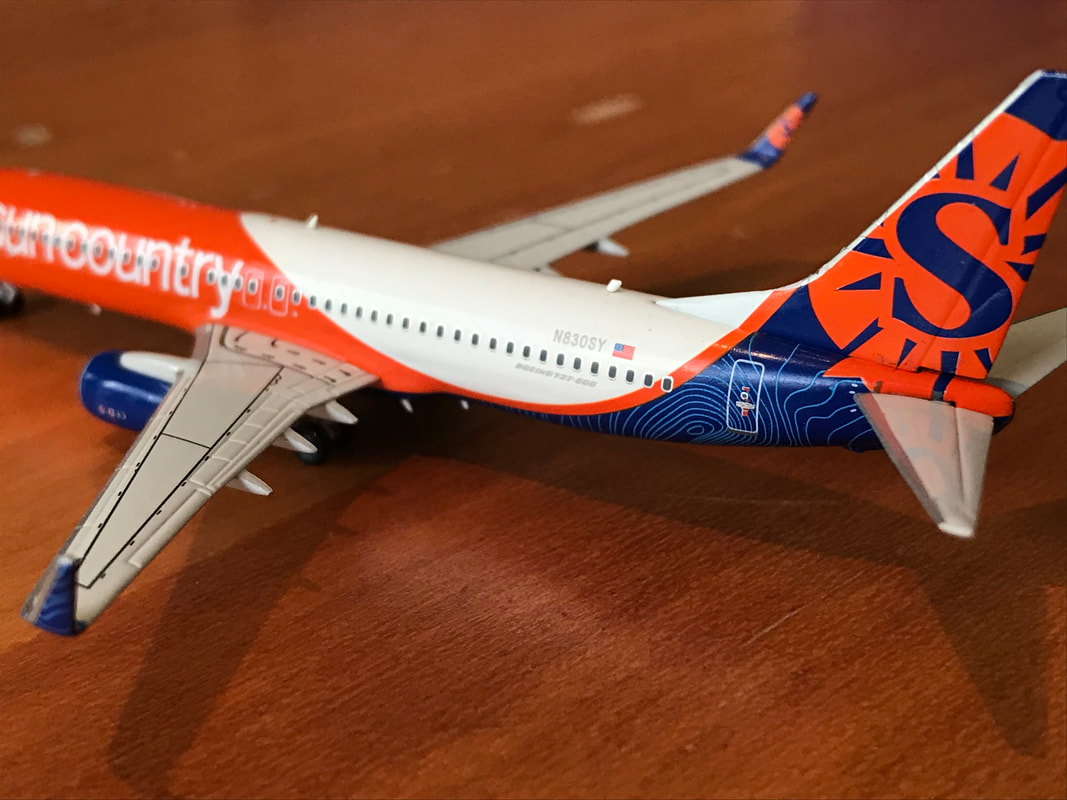 The next success is that the Sun Country titles are great. The font is matched perfectly and the placement is without flaw. Other titles are done well too. The gentle gray hue of the registration as well at the 'Boeing 737-800' titles are precisely placed and correctly sized according to my eye. Other details like over wing exits, engine cowling logos and passenger doors are all without flaw and more than adequately detailed for the scale. As usual, this serves as another example of NG Model's dedication to getting the details correct.
Conclusion:
Finally this is the only 1/400 737-800 wearing this scheme in 1/400.​ The final point to make here is that not only is the execution of NG Models superb, but so is their selection. A major part of this hobby isn't what you make necessarily, but WHEN you make it. Finding the gaps in the collections of 1/400 scale model airliners is what is spurring on NG models. Timing is everything and is a big reason why NG Models is currently, in my opinion, the #1 model maker. Buy with confidence. 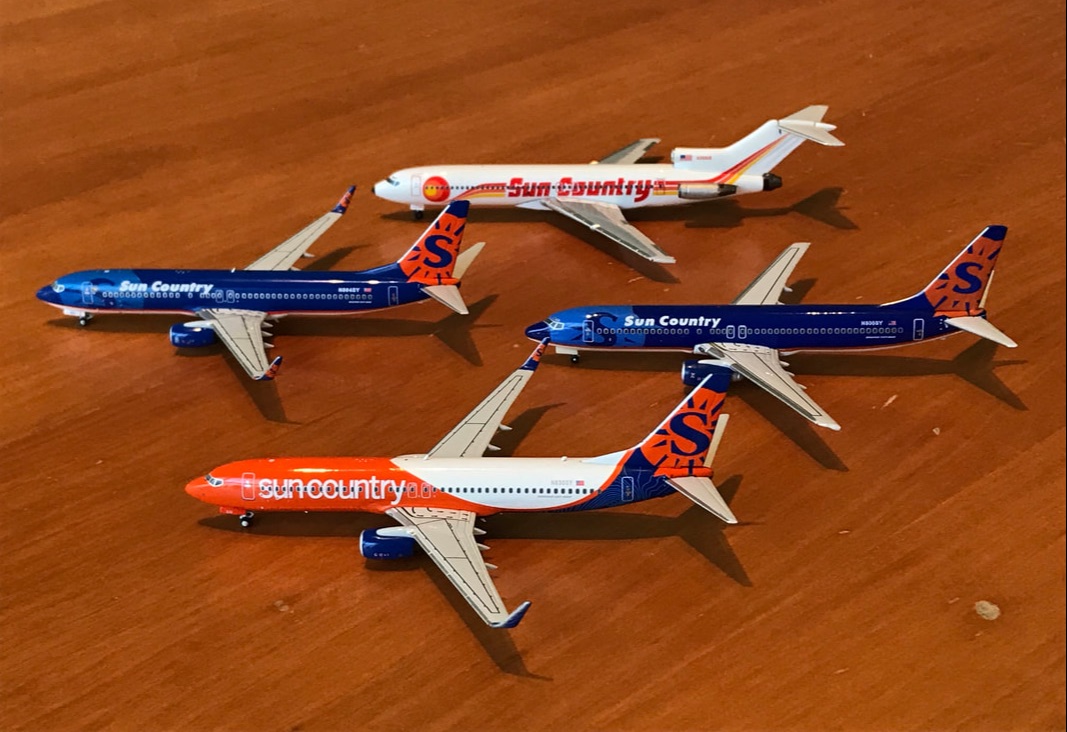