DIECAST CURIO
First Impressions:
​The 470th Dreamliner goes to Uzbekistan Airways. This is the first of three 787-8 Dreamliners delivered to Uzbekistan Airways in the past three years. The most recent of which was delivered in May of 2018. They are named UK-78701, UK-78702, & UK-78703 respectively. UZB has one more on order according to Boeing Commercial. This airplane was their first 787, and most immediately takes away the image of a post Cold War Uzbekistan and shows an effort towards modernization.

A few interesting notes on Uzbekistan. It is one of only two doubly land locked countries in the world, the other being Liechtenstein. It is mostly responsible (under  Soviet leadership) for the shrinking of the Aral Sea, which has been used to irrigate cotton. It's a region of the world used to being conquered and has been by the likes of Alexander the Great, Ghengis Khan, and several others over the centuries. Its capital is Tashkent, the main hub of Uzbekistan Airways and its fleet of 30 aircraft.

​JCwings announced this model back in September of 2016 and it never really received much fan-fare. Phoenix models released the exact same reg. one month later and again, there wasn't much excitement. It's interesting how some obscure airlines take off in popularity and how others draw very little attention. All told, there are only 9 models that have ever been made for Uzbekistan Airways. 3 from Aeroclassics, 3 from Phoenix, 2 from JCwings, and 1 from Golden Wings.

I find this color scheme a nice rest from the monotonous "Eruo-white" that we've seen so much of lately. I like that it captures the culture of Uzbekistan in that the aircraft is essentially wearing the flag of its country. The colors of the flag were developed and embraced shortly after Uzbekistani independence following the fall of the Soviet Union. The blue represents the water and sky, the white, purity, and the green a reference to the life and to Islam. The moon on the flag (which is not on the airplane) also represents Islam and the red lines represent the life force within. These details clearly delineate the airline as the country's flag carrier.
Construction:
JC Wings updated their 787 mould in 2016. Only two other 787-8's were made on this mould by JC before the Uzbekistan Airways 787-8 (a pair of Air Austral logo jets). Happily it's one of the first examples off the JC assembly line on this newer platform. Before this mould, which is still the current one in use by the date of this review, JC was building models on their obsolete and inferior cradle based 787 mould (perhaps  Gemini's?). This new mould is a huge leap forward and truly is a joy to own.

This is probably one of the most complicated 1/400 models I have speaking simply from part-count. From my calculation, there are at least 33 individual pieces, maybe more. As these models become more intricate, they increase the chance that something will go wrong during assembly. The fact that there are virtually no construction flaws on this model speaks volumes about the care JC Wings has put into their product. The only thing I can find wrong with the build is a tilted main gear.
Accuracy:
In this section I take a closer look at how close the physical mould looks compared to the real aircraft. A lot of folks in the 1/400 community have done their part to look closely at the newer 787-9 moulds that have been newly released into the marketplace over the last 2 or 3 years, but not so many have taken a closer look at the -8 version. There have been several moulds used. Gemini, Phoenix, Dragon, and others have their own take on this airliner. Most of these companies have invested in updating their moulds but I do believe JC Wings has done the best out of them all.
From what I can see, the accuracy of this mould is dead on. The overall shape and construction of the body of the aircraft of very good. The nose of this aircraft, while not elegant, but efficient is very well shaped and from the top of the fuselage down the cockpit windows however the slope down to the radome is not steep enough.
The front landing gear bay door is a bit too big but the front gear as a whole is just the right size so that the aircraft is perfectly balanced as it rests. The gears all roll and seem to be extremely close to scale.

There are a few other subtle differences and inaccuracies but these in some cases are acceptable because they emphasize the stronger points of the model and the more interesting parts of the airplane. For example, when referencing the side by side contrast, the inlet cowl is far too thick and most of the added antenna, (much to Mr. Kline's delight I would imagine) are too big. But these are details that on this very particular model add to its shelf appeal. I like that they are included and when comparing this to say, an old Gemini Jets version of the -8, the extra details are really stunning because they are so well incorporated into the model without flaw.
Paint and Printing:
The thing about the paint and tampo printing on models today is that it's so inconsistent. Sometimes the perfection that's capable on such a small scale is incredible, while at other times  it's a fast-track to buyer's remorse. Fortunately, there's none of that here. From top to bottom the application of paint is smooth. There are no smears, smudges or bubbles on the model surface.

​My biggest critique however lands in the printing department. To the manufacturer's credit, (for whatever the reason) the blue on the model is extremely tricky to nail down. I've looked at no less than 30 photographs of this aircraft in real life and in almost every single one, the shade of blue that spans the length of the fuselage is always different. This is usually because of differences in lighting or the angle or closeness of the aircraft. I think what they've done here, is gone too dark. However in the past, this same company has gone too light. Compare this aircraft to the IL-86 which I will be reviewing at a later date. The shade of blue is completely different.

Both of these were made by JC Wings, the IL-86 was produced in 2010.
Conclusion:
Based on the fact that we've only ever seen 10 mass produced models from this airline, I don't think we will see too many more in the future. I wouldn't put it past either JC Wings or Phoenix to reprint an Uzbekistan 787-8 with a different registration but I think that highly unlikely at this time. What I'd really like to see are a few other of the aircraft types Uzbekistan Airways has operated. For example, the Antonov-24, or the Yakovlev-40 (moulds not yet made in 1/400). Either way, This model will stay in my collection for a long time. It's due in large part to these 787s that Uzbekistan stays known to most of the modern world thanks to the ambassadorial role they play in visiting some of the globes biggest airports. 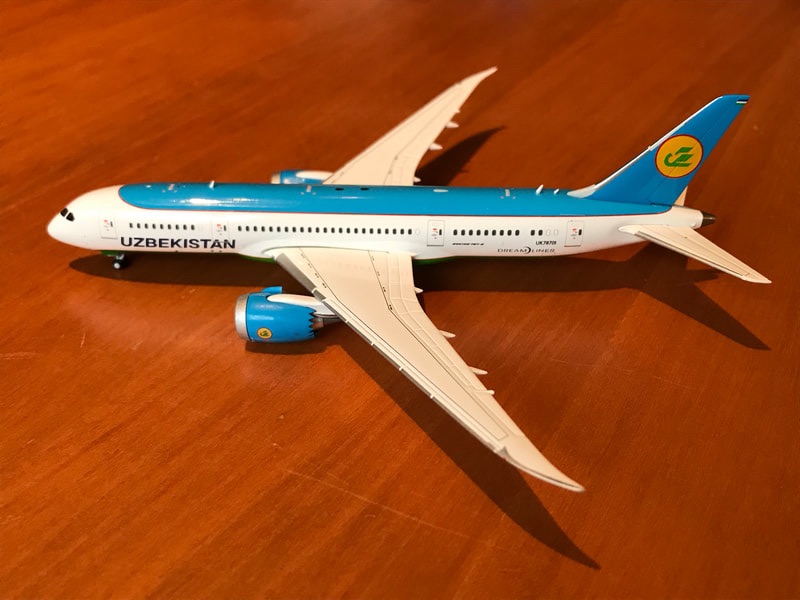