DIECAST CURIO
First Impressions:
Back in 2010, when this model was released, Phoenix was trying its hand at capitalizing on the wild popularity of Australia based Virgin brand aircraft. Models like the "V Australia" Triple-7 which came out in 2009 and the Virgin Blue "50th Aircraft," a pretty sea blue 737-7 from 2008 were selling for well over USD $50 on the open market. (A time when almost no model was more than $30 retail). They were also impossible to find at most online retailers. This model however arrived a little behind the frenzy and sat on shelves and declined in asking price for the months and years to come.

Since it has been sold out, the demand for the model has increased slightly since the Virgin Blue brand was reformed into Virgin Australia. A quick search shows the model easy to find at typically inflated prices of around USD $40-50.

I love this little model, from the marching cranes to the rising sun, there is so much character. The real thing flew under the Virgin brand for 4 years at the beginning of its life starting in November 2002. It first wore the standard red Virgin Blue colors until it was repainted in this livery for a few months before finally leaving the company in 2006. It has since been in service for China Southern as B-5157. 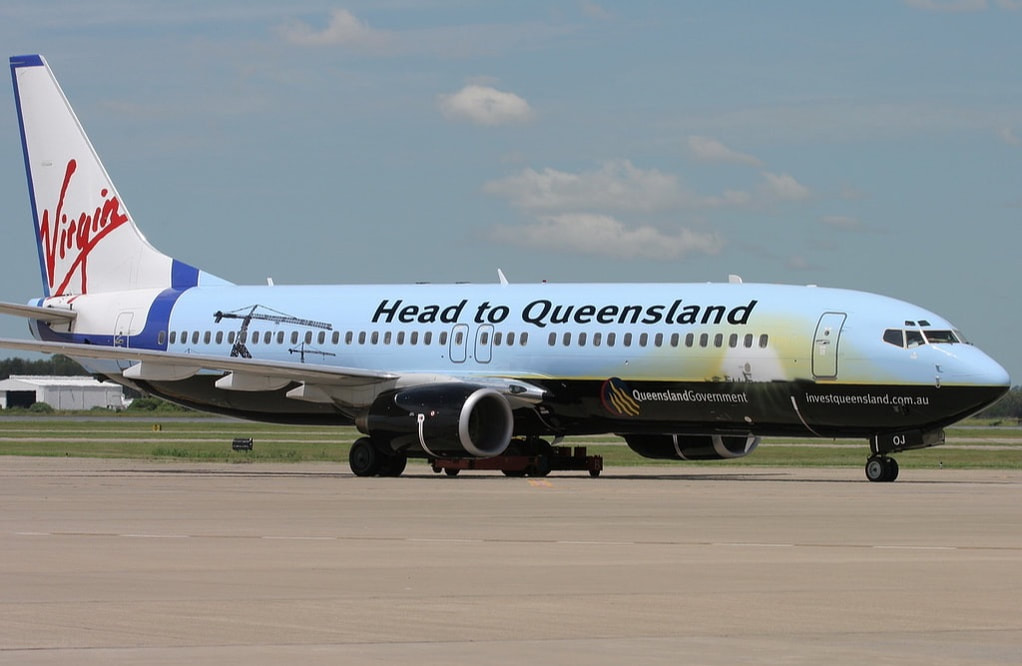 Photograph Cedit: Jim Woodrow
Construction:
​The quality of build in this hobby ebbs and flows. This model was produced at the end of an era where fixed plastic gears were commonplace. Rolling rubber wheels and other add ons were just around the corner. Phoenix was at this time well known for their quality construction and they came through on this 737.

​Out of the box, all parts were properly connected. No slips or sloppy connections at the joints between wings, stabs gears, and the like. CFM engines are properly installed and level. Tail is nice and vertical, no lazy leaning to one side or the other. All together, a very nice, solid model on a mould that I believe was shared with Gemini at the time. 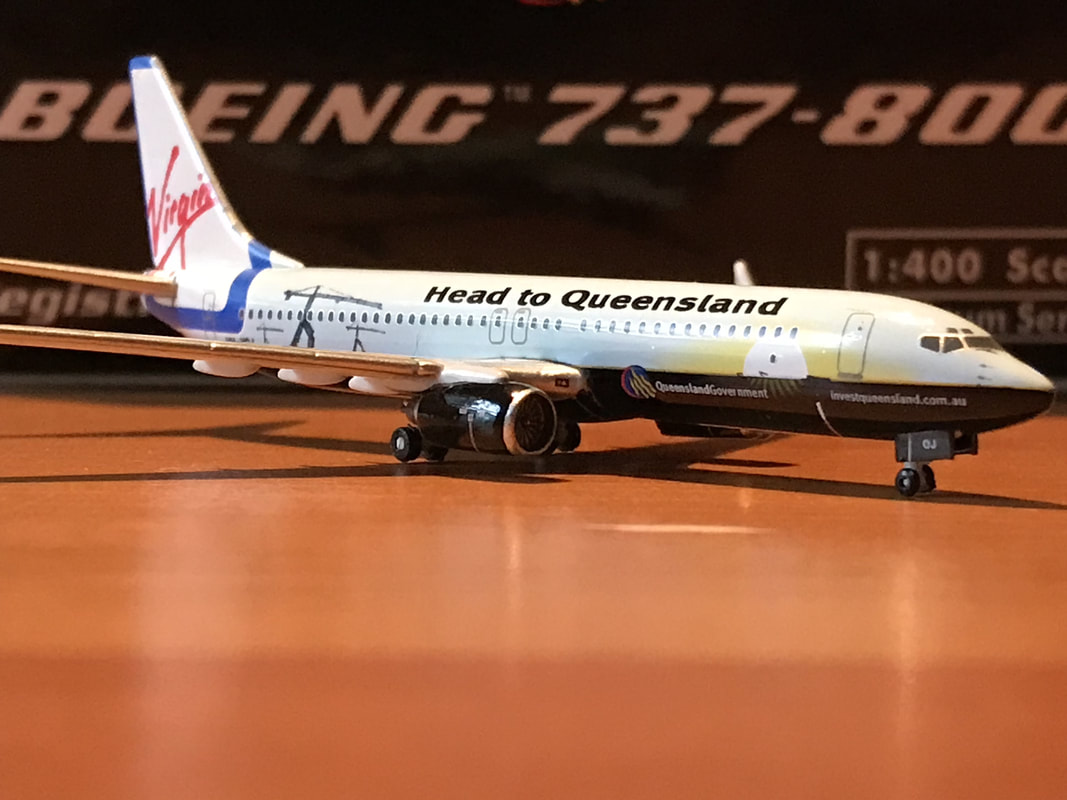 Accuracy:
There is obviously some redundancy in critiquing the accuracy of a mould no longer used. But at the time, this was about as good as it got when in came to the 737-800. The best thing about the mould is the proportions. When it sits in the palm of your hand, everything is where it should be and feels on spec.

While manufacturers have changed the tooling on their 737-800 moulds in recent years and in someways they've actually been made worse, one area that looks better to me is the wing joint.
Below is a new Gemini Max-8 wing joint followed by the real thing, last a zoomed in picture of the subject.
(On a side note, I'd like to see the top gap between the wing and the fuselage worked on to look a little more seamless).

It's easy to see how progress is being made over time. Still, this was one of the best 737-8 moulds in 2010 and in remembering the age of the mould, I do appreciate the areas where it does well.
Paint and Printing:
As much as the design on this model entertains me, it lets me down. More ambitious liveries have been done in the 1/400 scale up to this time period and have been done better. The first problem is the color. While again, I'll note my pictures are not of the quality that some can get of their 1/400s, there is too much of a difference in any light for the color to be correct. Phoenix simply went too light on the blue, making it almost mint green rather than a very light blue. It's not a complete waste, but a missed opportunity at greatness here.
Conclusion:
I'm sure that there are some folks out there that are for one reason or another offended by this model. Although it is a little bit of an ugly step child to the far grander Virgin aircraft produced before it, I still like it's optimistic spirit. The cumbersome cranes moving towards prosperity gives the plane that character that I love to see in a model. 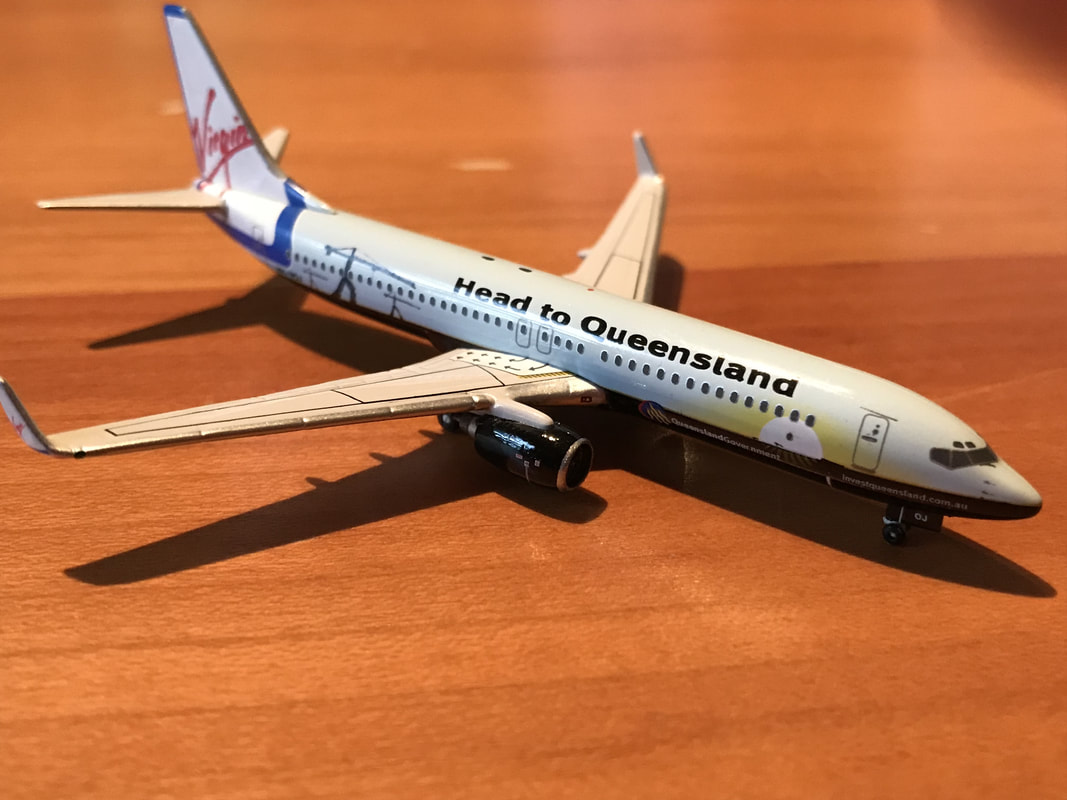