DIECAST CURIO
First Impressions:
Franky, I'm not largely into collecting classic aircraft. For one, as someone who was born in the 80's the nostalgia kick just isn't there. Second, I just find modern aircraft a little more collectable. But I never shy away from a good story, and the longer I collect, the greater the draw from classics has become.

I know many collectors out there have a criteria. A process that determines what "fits" into their collection and what doesn't. What I've learned after almost 10 years of collecting, is that my criteria, is to buy what I like. The era, aircraft type, airline, or manufacturer doesn't matter so long as there's an "awe" factor. And that's what brought me to this aircraft.

AeroPeru was founded in May of 1973 as a state-owned airline. It was largely privatized in 1982 and then struggled with consistency because of a proposed merger and the loss of fifth-freedom rights with the United States. In 1993, Aeromexico purchased a 70% stake and half of that was later sold off to Delta.

AeroPeru airship OB-1590 was not exclusive with the airline and has a long history with several airlines. This sleek looking tri-engine jet looks really nice out of the box.

Construction:
The review of any aircraft begins when the model is taken from the cradle. Happily, the model was perfectly intact, no loose wheels or gears. The model is made of all metal construction. The only non-metal components are the gears and the side-mounted engines.

My first issue with the construction of this aircraft is at the wing root. The seam is far from smooth and makes the model feel as though it was from 2003. 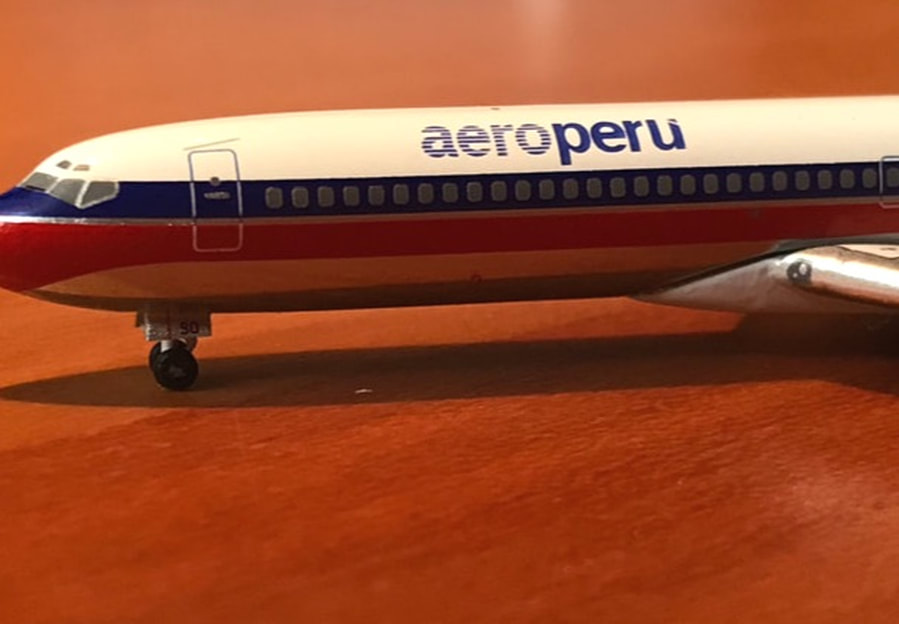 The joint between the wing and the fuselage is obvious and unsightly. If there was any reason for a new 727 mould, this would be it.
It also seems as though my particular model was not assembled quite perfectly. I'm not convinced that the wing section and the fuselage section of the model are machined as well as they could have been so as to fit together neatly. The reason for this point is that when mine was put together, the pieces weren't lined up well.

Over all, no real problems with the aircraft, but I would like to see a little more care with either the assembly or machining of the model's components. 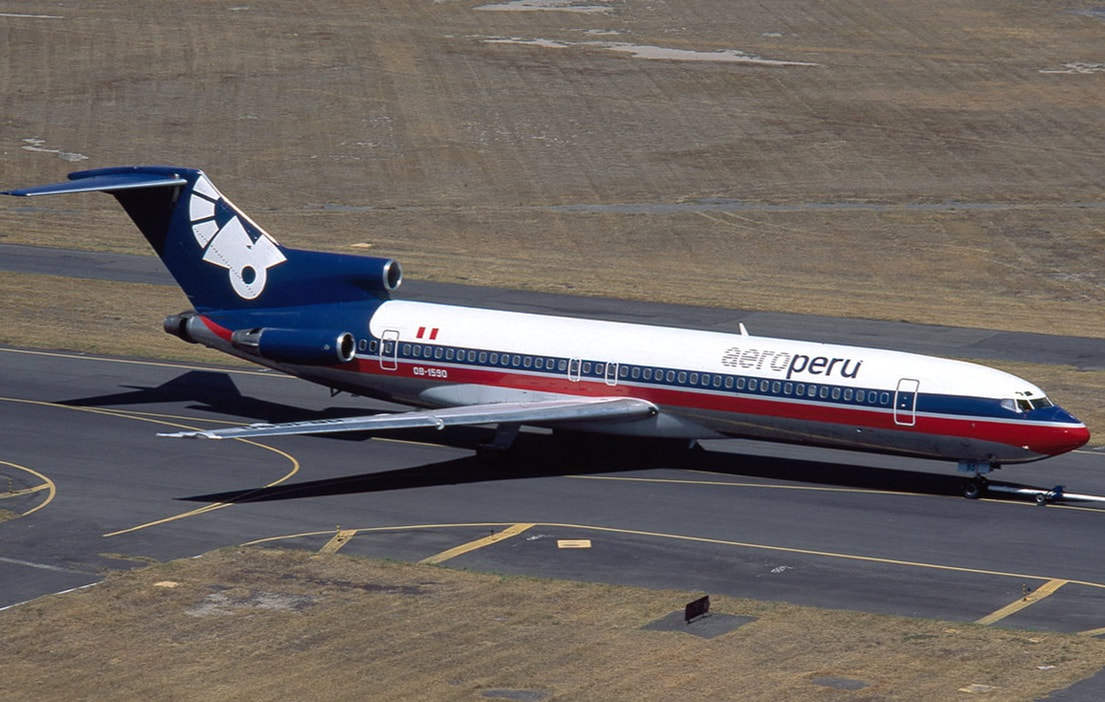 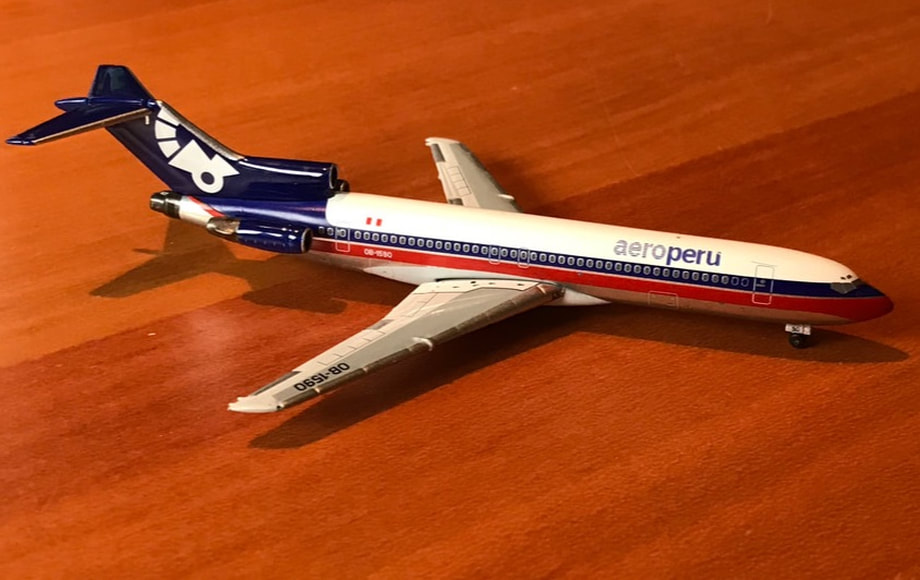 Accuracy:
It isn't entirely necessary to go over every millimeter of the model because of the way 727-2 moulds have been compared to one another throughout the community in the past. I personally own only two different 727-2 moulds. That of Gemini Jets and Aeroclassics. While both moulds are just fine, the short comings of this one fall in two main places.

First, the tail plane and the point where the horizontal stabs connect to it looks a little prehistoric and toy like. Other manufacturers have found a way to do it better and Aeroclassics could improve here as well.

The other inaccuracy is with the thickness and angle of the leading edge of the wing. At each wing's farthest point from the fuselage the thickness if fine, but as it runs closer to the body of the plane, the thickness of the leading edge becomes grander. Because of the thickness of the wing the front slats look lumpy side by side. The overall thickness also impacts the angle of the wing, just review the 1/1 photo above.
Paint and Printing:
This model has some true perfections. Most of which fall in this category. I have to imagine that getting the colors just right on some of these classic airliners has to be a challenge simply because getting good quality sources for extinct airlines are probably not easy to find. From what I can see, all the colors are quite well matched, I'm just not 100% sure if the blue right, being perhaps too light..

The AeroPeru logo on the side of the aircraft is another pleasant surprise. And another challenge must have been getting the fade/strike through look on the "aero" just right without washing out the title font but also getting that effect just right. 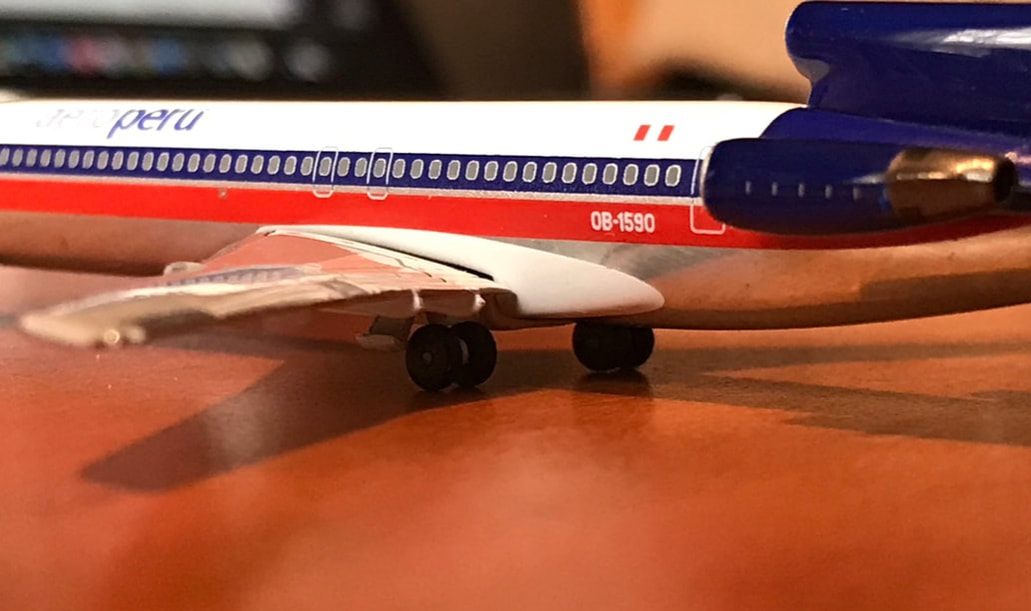 The wing gap can be clearly seen here as well. The Peruvian flag is too light in color.
Another feature that came together beautifully was the paint on brushed metal. I'm always amazed when they pull this off at the beautiful look that results. Above there, the red cheat-line and window line are perfectly placed and are neatly level with the cockpit windows.

On a final note, the utter details on this ship are impressively done. Cargo bay doors, the rear hatch, door cranks and over wing printing is flawless. Well done AC!
Conclusion:
The last AC box I opened was really disappointing (the Alaska Airlines A321 "Most West Coast"). It really felt like a regression from some of the other Aeroclassics I've received in the past. This 727 was a huge rebound and the model has given me great joy even from the simple standpoint of research, not to mention it's pleasing quality and detail. It has also spurred me to allow more room for classics in my collection and I'm excited to see where that may lead! Cheers, 22164! 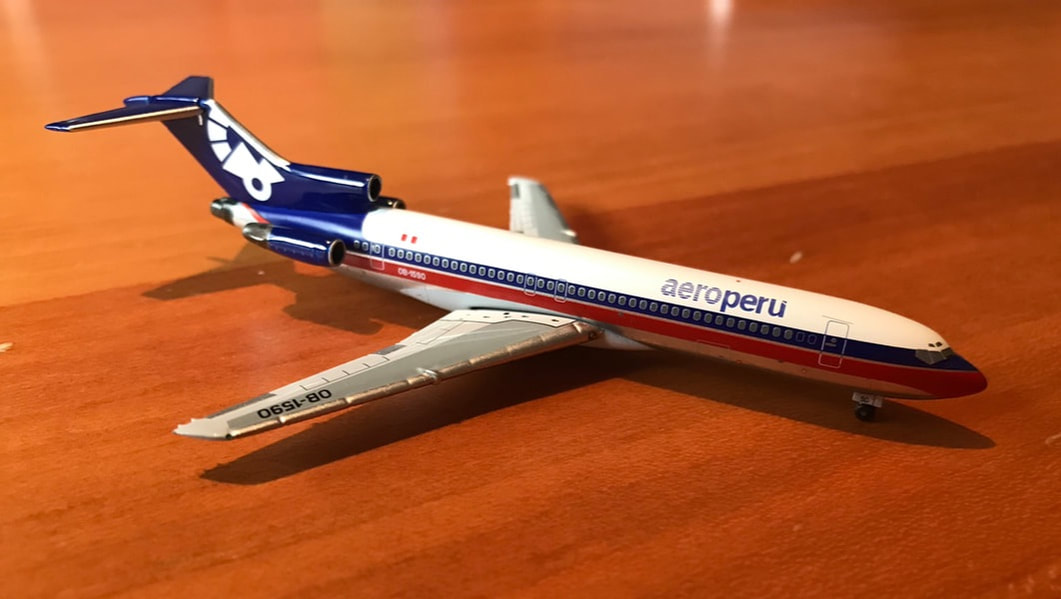